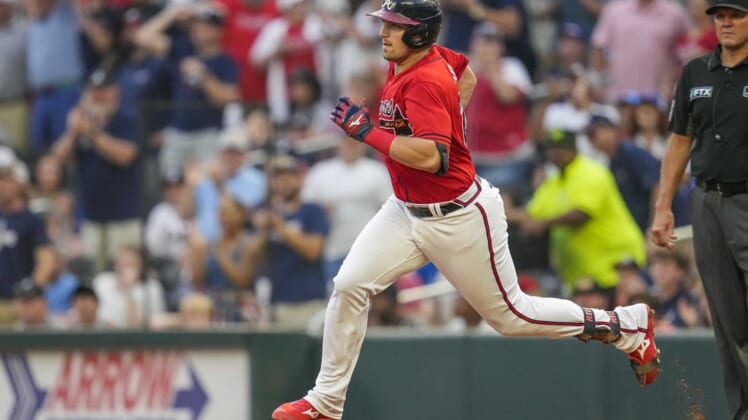 Austin Riley had three hits, including his 29th home run, and Kyle Wright won his National League-leading 13th game to help the Atlanta Braves defeat the visiting Arizona Diamondbacks 5-2 on Friday in the opener of a three-game series.

Riley, who had his 18-game hitting streak end on Wednesday, hit a solo homer off Madison Bumgarner in the first inning. He went 3-for-4 with two doubles and upped his batting average to .299.

Wright (13-4) extended his winning streak to six straight decisions. He pitched 6 2/3 innings on the muggy night and allowed two runs on five hits, two walks and five strikeouts. Wright has allowed two or fewer runs in five of his last six starts.

Kenley Jansen threw a scoreless ninth inning and earned his 24th save, despite loading the bases. He picked up three strikeouts, fanning Jordan Luplow to end the game.

Bumgarner (6-10) worked six innings and allowed five runs (four earned) on eight hits and three walks. He failed to record a strikeout, one start after fanning a season-high nine against Washington.

The Braves scored three times in the third inning thanks to two defensive gaffes. Michael Harris II walked and took second when Ronald Acuna Jr. reached on a misplayed grounder by second baseman Ketel Marte that was ruled a hit. Harris scored on the next play when Dansby Swanson’s grounder to third was thrown into right field by Josh Rojas. That was followed by an RBI double by Riley and a run-scoring single by Travis d’Arnaud, giving the Braves a 4-0 lead.

Arizona cut into the deficit Jake McCarthy singled in a run in the fourth and Geraldo Perdomo slammed his third homer, a solo shot, in the fifth to make it 4-2.

Atlanta added another run in the bottom of the fifth on Riley’s 29th double of the season, which scored Swanson. Riley struck out in the seventh, leaving him short of becoming the first Brave with four extra-base hits in one game since Freddie Freeman in 2017.