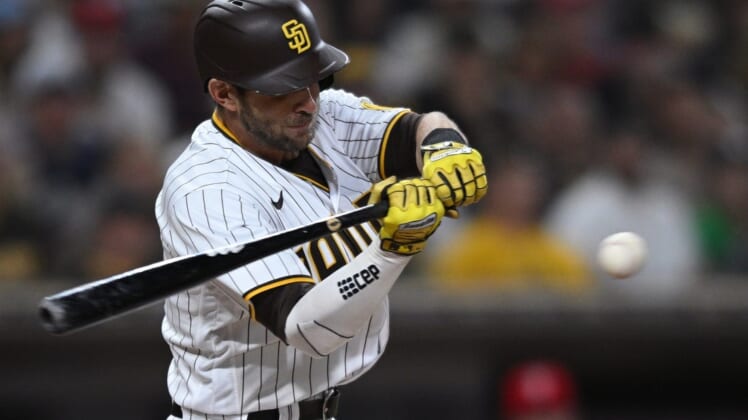 Austin Nola singled off brother Aaron Nola in the sixth inning Friday night to drive home the game’s only run and lead the San Diego Padres to a 1-0 victory over the visiting Philadelphia Phillies.

Eric Hosmer set up the situation with a one-out double off the Phillies’ starting pitcher.

“It felt good to get the hit,” said Austin Nola. “But there are mixed feelings. That’s my brother. He pitched a heck of a game. I knew he was going to attack me. I just went after it.”

Starting left-hander MacKenzie Gore and three relievers shut out the Phillies on five hits to even the series at 1-1.

Gore rebounded from two bad starts to blank the Phillies on three hits and four strikeouts over five innings. In the third, he retired Bryce Harper with the bases loaded on an inning-ending fly to right. Two innings later, he struck Harper out with two on and one out.

Nabil Crismatt (4-0) worked two scoreless innings to get the win. Luis Garcia struck out Rhys Hoskins, Harper and Nick Castellanos in a perfect eighth. And Taylor Rogers picked up his 22nd save, getting Kyle Schwarber to fly out to center to end the game with the bases loaded.

Aaron Nola (4-5) allowed the one run on seven hits and two walks with 10 strikeouts in seven innings to suffer the loss.