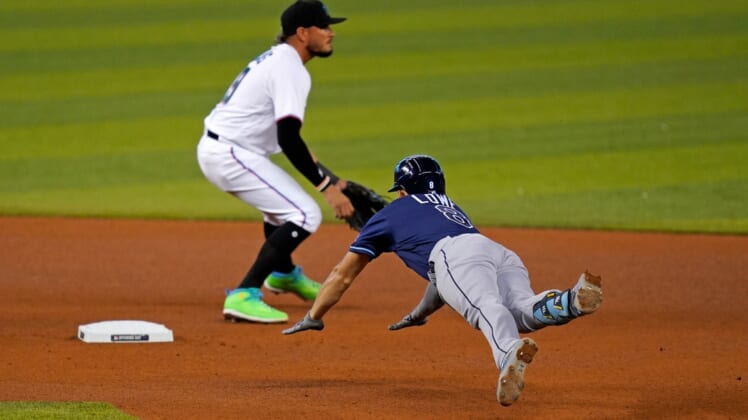 Austin Meadows broke open an Opening Day scoreless pitching duel with an eighth-inning homer, leading the visiting Tampa Bay Rays to a 1-0 win over the Miami Marlins on Thursday afternoon.

Tampa Bay won despite getting just five hits, thanks to the work of four pitchers and the shot by Meadows, who hit a career-high 33 homers in 2019.

Meadows, a left-handed hitter, slugged a 2-0 fastball from right-hander Yimi Garcia (0-1), belting the pitch 419 feet to right-center with two outs in the frames.

Ryan Thompson earned Thursday’s win, pitching one scoreless inning. Diego Castillo pitched a perfect ninth for the save as Tampa Bay limited Miami to just three hits — all singles — and one walk.

Both starters pitched scoreless ball but left with no-decisions.

Tampa Bay’s Tyler Glasnow was lifted after six innings, having retired the final 16 Marlins batters he faced. He struck out six, walked none and gave up just one hit — an infield single by Jesus Aguilar.

Miami’s Sandy Alcantara was almost as good, allowing two hits and two walks while striking out seven in six innings.

Alcantara pitched out of a pair of jams. In the first inning, he faced Kevin Kiermaier with the bases loaded and two outs, striking him out on three pitches. The final pitch in that sequence was a low changeup, and Kiermaier swung at air.

In the fourth, Brandon Lowe stroked a leadoff double. But he was stranded when Yandy Diaz lined out to center, and Kiermaier and Willy Adames both struck out swinging.

After Meadows gave Tampa Bay a 1-0 lead in the top of the eighth, Miami threatened in the bottom of the inning. Jorge Alfaro singled, and Miguel Rojas’ line drive was caught on the warning track by left fielder Manuel Margot. Reliever Peter Fairbanks then walked Garrett Cooper. But Fairbanks extinguished the danger by getting Corey Dickerson on a fly to center.

With none on and one out in the bottom of the ninth, Aguilar’s drive was caught on the warning track in left, and that was Miami’s last solid chance to tie the score. Castillo then struck out Adam Duvall to end the game.