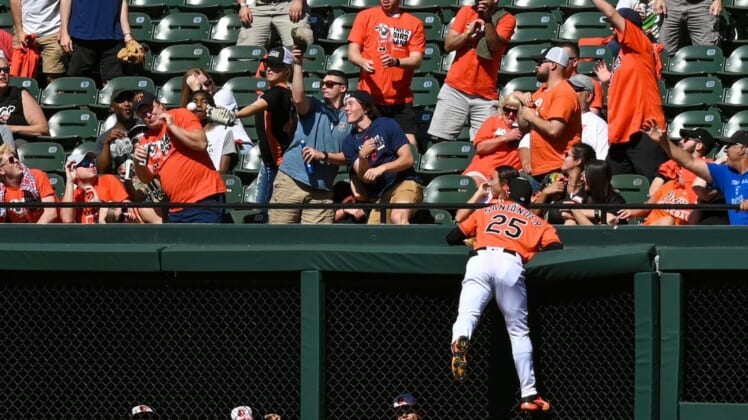 Austin Hays hit a three-run home run and the Baltimore Orioles scored all their runs on long balls in a 5-4 victory against the visiting Cleveland Guardians on Saturday.

Trey Mancini and Rougned Odor also homered for the Orioles, who were held to four hits.

Cleveland had a four-game winning streak snapped despite home runs from Jose Ramirez in the first inning and Oscar Gimenez in the second inning.

Felix Bautista (2-1) was the winning pitcher with an inning of shutout relief.

Guardians starter Triston McKenzie (3-5) took the loss, giving up three home runs in his seven-inning outing that included three walks and four strikeouts. He was tagged for two homers in a 2-1 loss in his previous start in a game vs. Detroit.

This marked the first time in seven games that Cleveland’s opponents scored more than three runs.

The Orioles trailed 2-1 when Hays launched his sixth home run of the season in the third inning. The blast came a day after his 13-game hitting streak ended.

The Guardians chipped away, plating two runs in the fifth. Those came on Steven Kwan’s fielder’s choice grounder and Myles Straw’s groundout.

Kwan doubled to lead off the eighth, but that threat ended with Josh Naylor’s flyout after the Guardians loaded the bases with two outs.

Gimenez had two of Cleveland’s five hits. Ramirez, who has 14 home runs, reached on a pair of walks.