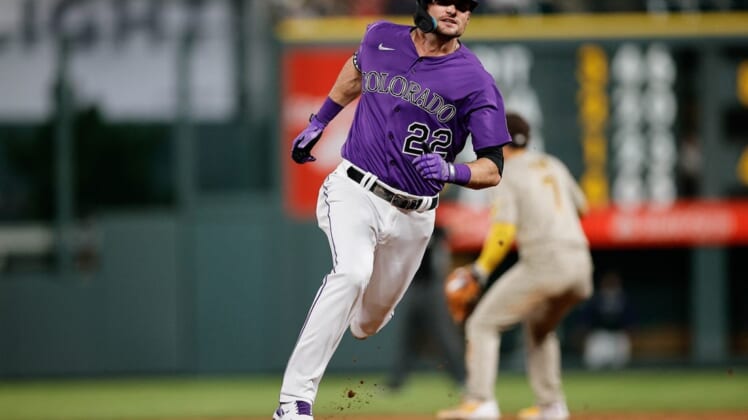 Daniel Bard pitched a perfect ninth inning to earn his 19th save for Colorado, which is 6-3 against the Padres this season.

The Padres got on the board in the second inning off of Gomber. Mazara and Ruiz hit consecutive one-out singles before Jose Azocar’s grounder erased Ruiz at second and put runners on the corners.

Kim followed with a double to left to score Mazara and give San Diego a 1-0 lead.

That was the only run allowed by Gomber (5-7), who yielded six hits and a walk while striking out three.

Padres starter Mike Clevinger (2-2) breezed through the first four innings, allowing only a two-out double by Sam Hilliard in the third. Colorado finally broke through in the fifth.

Ryan McMahon led off with a walk but was out at second on Yonathan Daza’s fielder’s choice. Daza moved up a base on Brian Serven’s groundout and scored on Garrett Hampson’s single up the middle.

The Rockies took the lead in the sixth and chased Clevinger in the process. Connor Joe led off with a walk, Iglesias followed with a single and Blackmon hit his 14th home run into the seats in left to give Colorado a 4-1 lead.

One out later, McMahon tripled to end Clevinger’s night. Clevinger allowed four runs on five hits and a walk while striking out four in 5 1/3 innings.

The Rockies padded the lead in the seventh. Trent Grisham’s error in center on Hilliard’s fly ball put Hilliard on third. Joe was hit by a pitch, and a fielder’s-choice grounder from Iglesias made it 5-1.

The Padres got two back in the eighth on RBI singles by Mazara and Ruiz, but Colorado threw out two runners at third to stay in the lead.

The teams have each won once to open a four-game series.