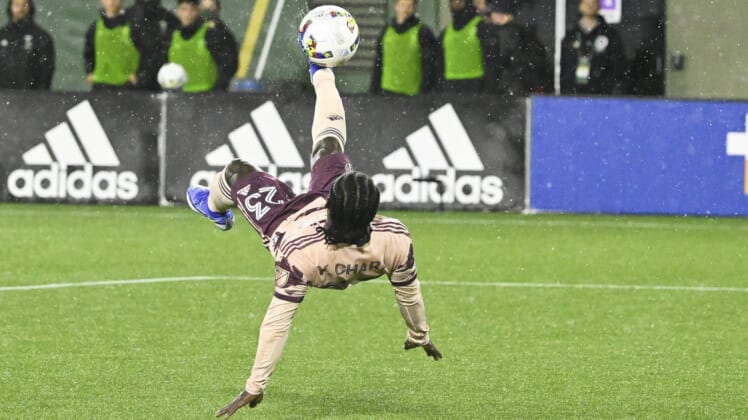 Feb 26, 2022; Portland, Oregon, USA; Portland Timbers forward Yimmi Chara (23) scores a goal off a bicycle kick during the second half against the New England Revolution at Providence Park. The game ended in a tie 2-2. Mandatory Credit: Troy Wayrynen-USA TODAY Sports

In just their second season in MLS, Austin FC looks like the class of the league after a 2-0-0 start while sitting atop the Western Conference with 10 goals scored.

It might be early, but the fast start represents progress from a club that won just nine games in its debut season while on the way to a second-to-last-place finish.

Austin FC blasted FC Cincinnati 5-0 in their season opener then steamrolled Inter Miami CF 5-1 last weekend in a pair of home games. The club goes to the Pacific Northwest this week to face the defending Western Conference champion Portland Timbers, who are looking for their first victory after consecutive ties.

Where Portland (0-0-2, 2 points) has already faced two quality opponents in the New England Revolution at home and Los Angeles FC away, Saturday night will be the first real test for Austin FC (6 points).

The Timbers drilled Austin 3-0 at home on the final day of last season. But before that, it was the expansion side that dominated the matchup, with a combined score of 7-2 in two games at Texas.

“(Portland) and Seattle have played for the last six championships out of the West. They’re the two best teams in the West,” Austin FC head coach Josh Wolff said.

It’s actually seven consecutive MLS Cup appearances combined, and the Timbers have won the West three times in that span.

Portland is winless in the first two games of the season for the seventh time in 12 seasons. In each of the past six seasons, the Timbers have not won the season’s third game.

Yimmi Chara has bicycle-kick goals in each of the past two games for the Timbers. Portland will have to replace right back Claudio Bravo, who received a red card last week.

“We’re getting little by little more guys (back),” Savarese said.