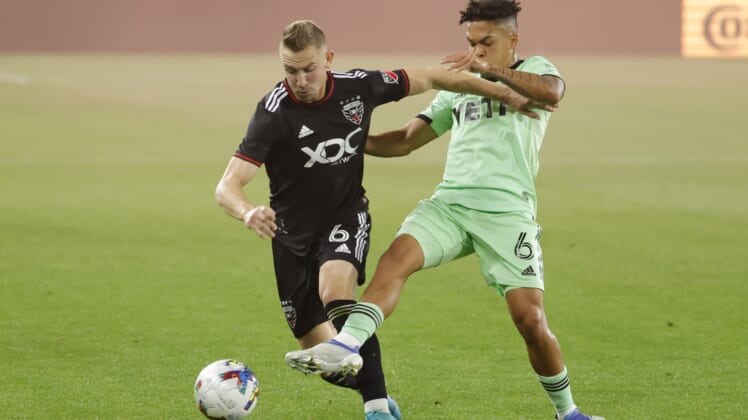 It was the first-ever match between the two teams and a tale of two halves. The first 45-plus minutes belonged to D.C. United and Ola Kamara while the second half, played with the home team a man down, was owned by Austin FC.

Gabrielsen’s game-winning goal came off a long crossing pass to the far post by Diego Fagundez that bounced out of the hands of D.C. United goalkeeper Bill Hamid.

D.C. United (2-4-0, 6 points) have dropped four straight matches, with three of those losses coming at home. It’s the first time D.C. has been defeated in three straight home MLS matches since May 2017.

Kamara’s left-footed shot off a headed pass from the back post by Andy Najar in the 26th minute found the net. Kamara’s goal went through traffic in front of Austin goalkeeper Brad Stuver, who barely moved toward the shot.

Kamara added to the lead in first-half stoppage time off the second of back-to-back opportunities from corner kicks. Julian Gressel sent the pass from outside and right of the box and to Kamara, who made short work of the chance into the upper right corner of the net.

Kamara was then sent off in the seventh minute of first-half extra time for his second yellow card of the match, forcing D.C. United to play the entire second half with just 10 men.

Austin pressed the action in the second half and finally broke through, with Danny Hoesen getting the visitors on the board in the 80th minute. Hoesen’s goal came off a crossing pass from Hector Jimenez.

Sebastian Driussi then knotted the match in the 85th minute, sitting on the doorstep for a pass from Jimenez.

The match was delayed for about 30 minutes because of lightning strikes in the Washington D.C., area.