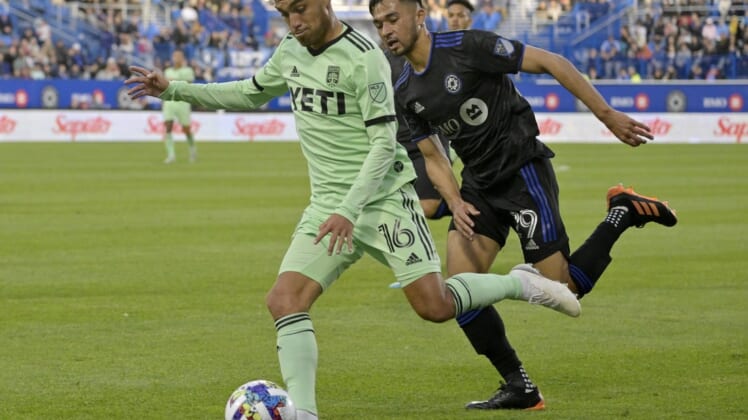 Maximiliano Urruti scored the lone goal for Austin FC in a 1-0 win against host CF Montreal on Saturday.

Urruti, who played two seasons with Montreal in 2019 and 2020, scored in the 67th minute. Jon Gallagher sent a cross to Urruti driving up the middle. Montreal goalkeeper Sebastian Breza (one save) came out of his net to try to beat Urruti to the bouncing ball, but Urruti got his foot on it at the top of the goal area and sent it into the open cage.

Montreal had the first opportunity for either side in the fourth minute when Matko Miljevic sent a shot from high in the box that sailed over the net.

It took until the 14th minute for Austin to muster its first chance off a shot from Sebastian Driussi from above the arc.

Driussi was at it again five minutes later. Urruti sent a low cross inside the box that went through the legs of teammate Diego Fagundez to Driussi, whose shot to the far corner rolled just past the outside of the right post.

Montreal’s Kei Kamara nearly converted off a corner from right in front at the goal line but was stopped by Austin goalkeeper Brad Stuver (two saves).

Austin midfielder Daniel Pereira was assessed his second yellow card of the match in the 44th minute, leaving Austin down to 10 men for the remainder of the contest.

Montreal had two quality chances early in the second half.

In the 51st minute, Miljevic took a feed at the top of the box from Joaquin Torres, but his shot missed the net. Two minutes later, Zachary Brault-Guillard sped down the right side before sending a pass to an uncovered Kamara in front for a chance, but Stuver denied the veteran striker.

Fagundez came close to putting Austin on the board in the 58th minute from the right side of the box, but the shot hit the post.