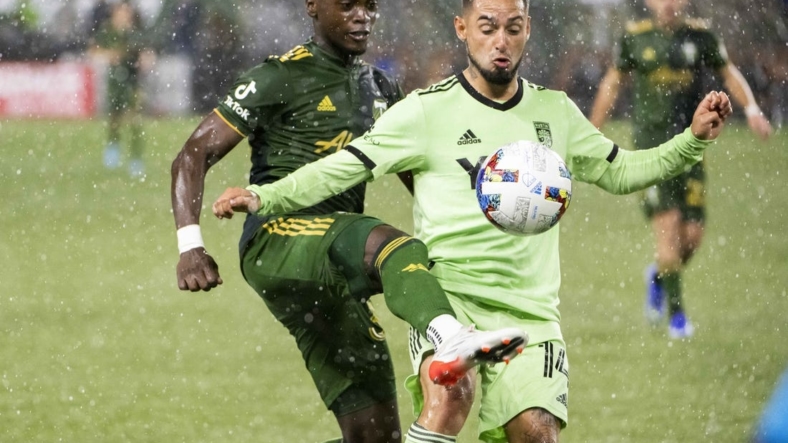 Austin FC will look to take another step toward the playoffs and the top of the Western Conference table when they host the surging Portland Timbers on Wednesday in a key late-season match.

Both teams bring plenty of momentum into the midweek dustup, thanks to crucial home victories on Friday in their most recent games.

Austin’s win moved it closer to securing a spot in the postseason in just its second season in MLS and within six points of first-place LAFC with seven matches to play. Austin got a second-half brace from Maxi Urruti, Diego Fagundez had a goal and two assists, and Sebastian Driussi also scored in the impressive win.

“We’ve got three points available on Wednesday, and we’ll try to grab points when we can,” Austin coach Josh Wolff said. “There’s a lot of games with a lot of good teams left. We don’t look beyond the next game.

“Wednesday comes a little quicker, so we’ll freshen up and it’ll be nice to use some other guys in the coming games, but we’ll see where this group is at. We win, and we’ll see what the board looks like come the end of the year.”

Driussi’s goal was his league-leading 19th of the season. It was the 10th straight game that Driussi has either scored or assisted on a goal.

Portland’s win over Seattle clinched the Cascadia Cup, a fan-created trophy between the Timbers, Seattle and Vancouver, for the first time since 2017.

More importantly it allowed Portland to stay in the hunt for a spot in the playoffs. The Timbers are in eighth, one point below the LA Galaxy for the West’s final postseason spot, with six matches to play.

Dairon Asprilla scored on a penalty kick just before halftime and Sebastian Blanco sealed the win for Portland with a goal early into the second half.

Portland coach Giovanni Savarese said after the win that his side must keep its collective foot on the gas to work its way back into the postseason.

“We have a lot of difficult matches coming in front of us,” Savarese told MLSSoccer.com. “We need to be ready. This is the time for us to make sure that everyone is as professional as they can be if we want to make a run again and hopefully first make the playoffs.