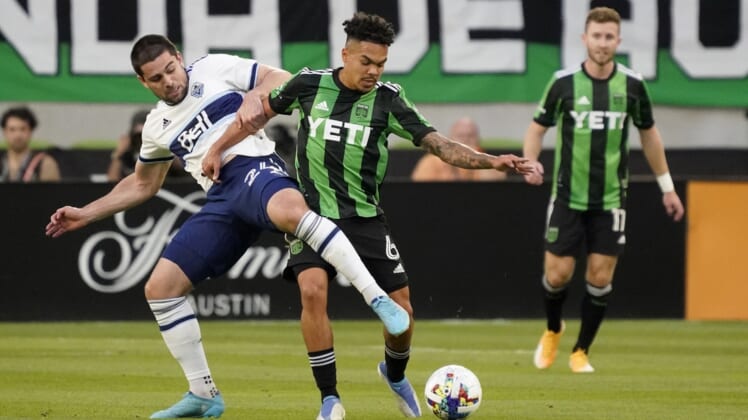 Maximiliano Urruti tallied two first-half goals and Sebastian Driussi added a goal and an assist as Austin FC rolled to a 3-0 home victory over the struggling Vancouver Whitecaps on Saturday in a Western Conference match.

Austin (5-1-2, 17 points) has won three straight matches for the first time ever. Goalkeeper Brad Stuver and the defense recorded Austin’s third clean sheet of the season as the team extended its streak without a loss to five games.

Urruti scored the game’s first goal, working a breakaway in the 11th minute with Driussi after a turnover in the midfield and a pass from Jon Gallagher.

Driussi carried the ball deep into the zone before feeding Urruti, who blasted a shot through Whitecaps’ goalkeeper Thomas Hasal and into the net.

Austin added to the advantage in the 26th minute with Urruti scoring after an assist from Alex Ring and a pass that started the play by Daniel Pereira. Urruti, standing just outside the six-yard box, steadied the ball and took a step back before finding the bottom-left corner behind Hasal.

Driussi racked up Austin’s third goal — and his league-leading sixth of the season — by heading in a headed pass to the far post from Julio Cascante in the 68th minute after a throw in deep into the Vancouver penalty area.

Austin has won four of its five home matches this season (with one draw) and has the league’s best home record by goal differential.

Vancouver dropped its third consecutive game. The Whitecaps (1-6-1, 4 points) are yet to earn a point on the road, with five away losses in which they have been outscored 14-3. Vancouver is minus-11 in goal differential this season.