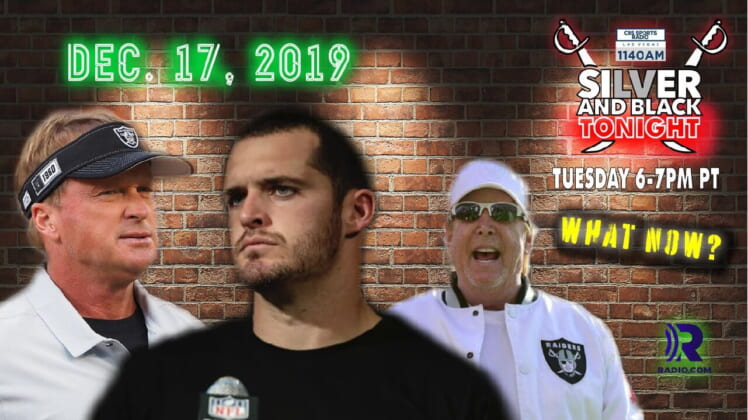 We were back live for our Tuesday night recap of the week’s action for the Silver and Black. It wasn’t the Oakland ending everyone wanted and the Raiders now have more questions than answers heading to Las Vegas.

We were live from Findlay Toyota on Tuesday night for another week of Silver and Black Tonight on CBS Sports Radio 1140.

We talked all about the Raiders last game in Oakland as our own Chaz Osborne covered the game live from the Coliseum. He takes you to the tailgates where he found the hate for Mark Davis and Las Vegas at all-time high levels. And, surprisingly, said a vast majority of Raiders fans were not happy with Derek Carr.

Also: doesn’t coach Jon Gruden deserve a good amount of criticism for the team’s failure in the second half? The Raiders have a -81 scoring differential in the third quarter and have only scored 12 fourth-quarter points in the past five games. Something has to change. Will it be the coaching? Quarterback? Or both?

SilverAndBlackToday.com is our 24/7 website covering all things Raiders. We also have our regular podcast, and it and the radio show archive, are available for download on iTunes or Google Podcasts, stream and follow on Spotify, Soundcloud & Spreaker.