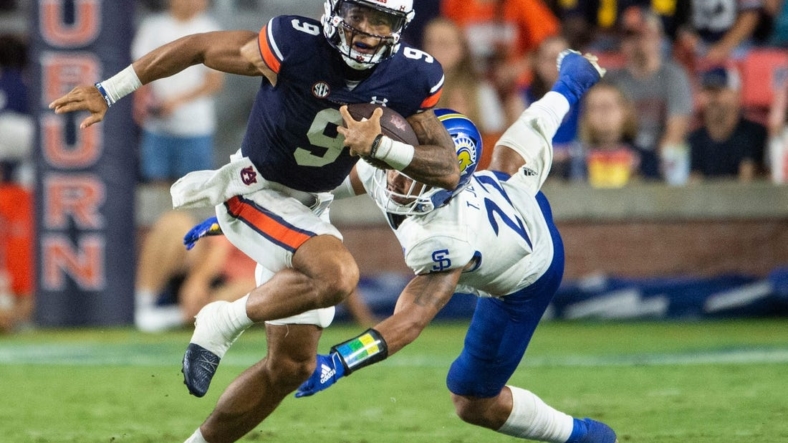 Tank Bigsby’s one-yard touchdown run gave Auburn a lead it wouldn’t relinquish as the Tigers’ rushing attack and defense overcame their shaky quarterback play to pull out a 24-16 victory over visiting San Jose State on Saturday.

Bigsby rushed for 51 yards on 13 carries to lead a ground attack that ran for 210 yards and three scores on 38 carries.

The running game enabled Auburn (2-0) to compensate for quarterback T.J. Finley going 13-for-20 passing for 167 yards and an interception. Finley also rushed for 18 yards and a touchdown on five carries for the Tigers.

Finley’s backup, Robby Ashford, also threw three passes, resulting in a one-yard completion, one interception and an incompletion. He also had seven carries for a team-high 61 yards.

San Jose State (1-1) was led by Chevan Cordeiro, who went 24-of-40 passing for 275 yards, with no touchdowns or interceptions. The Spartans ran for just 54 yards on 29 carries, led by Kairee Robinson’s 24 yards and a touchdown on 11 carries.

Auburn responded by taking the lead on Jarquez Hunter’s seven-yard touchdown run that capped a nine-play, 75-yard drive with 6:31 left in the half.

But the Spartans countered when Robinson powered into the end zone from a yard out to punctuate a 12-play, 75-yard drive with 58 seconds left that gave San Jose State a 10-7 lead at halftime.

Auburn mustered just six first downs and committed eight penalties for 76 yards in the first half.

However, Auburn took the lead for good on their opening drive of the second half when Bigsby’s one-yard touchdown run capped a nine-play, 69-yard drive to give the Tigers a 14-10 lead.

Finley countered on Auburn’s ensuing possession with a four-yard touchdown run for a 24-13 lead with 12:45 left.

Schive’s 37-yard field goal with 2:11 provided the final margin. The Spartans’ ensuing onside kick went out of bounds, enabling Auburn to run out the clock.