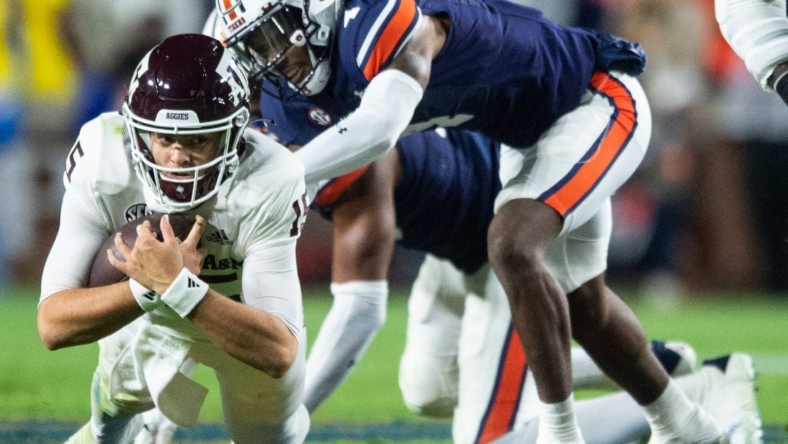 Auburn’s Jarquez Hunter and Tank Bigsby each rushed for 121 yards — combining for more yards than Texas A&M had in total offense — in a 13-10 victory Saturday that gave the visiting Aggies their first six-game losing streak in 50 years.

The Aggies punted on their first nine possessions of the game.

Weigman, who had 13 straight incompletions at one point, finished 14 of 36 for 121 yards. He ended his incompletion streak with a pass to Amari Daniels that resulted in a 3-yard loss.

Auburn took a 7-0 lead with 1:33 left in the first quarter on Jake Johnson’s 16-yard reception on a pass from Robby Ashford. The scoring drive (four plays, 62 yards) was aided by Bigsby’s 39-yard run, which preceded Ashford’s TD pass.

Alex McPherson, who missed a 54-yard field goal early in the third quarter, made a 34-yarder with 39 seconds left in the quarter to increase the lead to 10-0.

Texas A&M, which did not get past the Auburn 39 until the fourth quarter, started with its best field position after Edgerrin Cooper intercepted a pass by Ashford at the Tigers 39 with 12:40 remaining.

Weigman completed consecutive passes to set up Randy Bond’s 48-yard field goal that cut the lead to 10-3 with 10:48 left.

Texas A&M’s first turnover, a fumble by Weigman on a sack by Colby Wooden, resulted in Auburn getting the ball at the Aggies 32 with 5:34 left. That led McPherson’s 26-yard field goal with 3:02 remaining that increased the lead to 13-3.