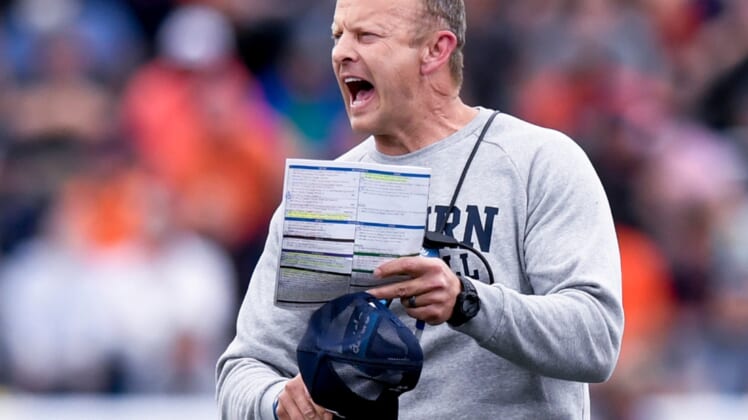 Auburn Tigers head coach Bryan Harsin coaches against Houston during the Birmingham Bowl at Protective Stadium in Birmingham, Ala., on Tuesday December 28, 2021. Bham46

Kiesau is the third offensive coordinator in coach Bryan Harsin’s 13-plus months at the school. Mike Bobo was fired after last season and Austin Davis was hired to replace him but resigned his post six weeks later due to personal reasons.

Kiesau, 49, came with Harsin from Boise State when the latter was hired by Auburn. He was co-offensive coordinator in 2019 before being the lone person running the Broncos’ offense in 2020.

“I’ve been fortunate enough to work with some really good coaches in my career, but very few have the offensive mind, the attention to detail and the overall plan for execution like Coach Harsin,” Kiesau said in a news release. “I’m fired up to work in a collaborative offensive environment like we have, from the head coach to the coordinator and position coaches to the analysts and all the way down to the graduate assistants. This gives you an opportunity to be successful, and our players feel that chemistry.”

“One of the biggest things our players and program needs going from year one to year two with us is consistency — consistency with the system, the coaches and our plan for success,” Harsin said in the news release. “Coach Kiesau and Coach Bellantoni are excellent football coaches and teachers of the game with 44 years of Division I experience between them, including 22 combined years in coordinator roles.”

Just seven days ago, Auburn completed an inquiry into Harsin’s program after nearly 20 players left via the transfer portal. Harsin’s methods of treating people — including players and coaches — were investigated the university before it was determined he would remain the coach for the 2022 season.

Neo Sports Insiders - A Lifelong Passion for the Browns