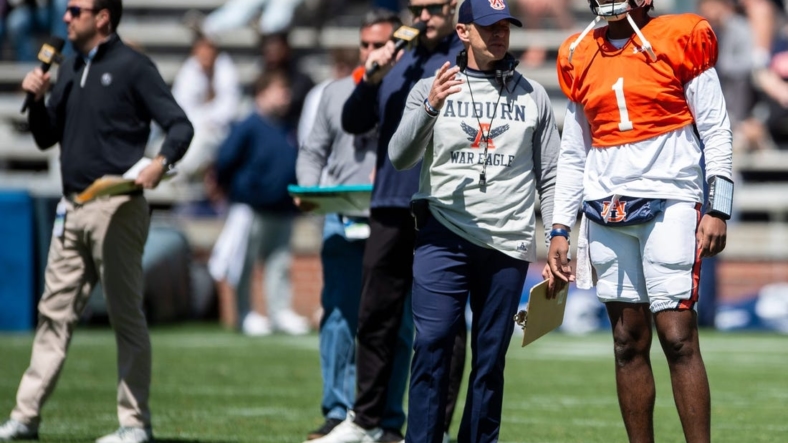 Auburn will try to emerge from a historically dreadful losing streak Saturday night when the Tigers open the 2022 season against visiting Mercer.

Last season, Bryan Harsin’s Tigers became the first Auburn team in 71 years to end a season with five consecutive defeats. They finished 6-7 after losing to Houston in the Birmingham Bowl and endured an offseason in which Harsin’s future was very much in doubt.

The Tigers hope to bounce back from their first losing season since 2012 behind junior T.J. Finley, named as the starting quarterback Monday. The 6-foot-7, 250-pound Finley played in nine games last year, starting the final three after Bo Nix got injured.

After Nix transferred to Oregon, Finley beat out two transfers — Robbie Ashford (Oregon) and Zach Calzada (Texas A&M) — to retain his spot atop the depth chart.

“I didn’t come here just to win a starting job,” said Finley, who completed 54.7 percent of his passes for 827 yards with six touchdowns and one interception last season. “I came here to lead this team and win an SEC championship and a national championship.”

Finley will be complemented by Tank Bigsby, who rushed for 1,099 yards and 10 touchdowns last year, and Jarquez Hunter, who ran for 593 yards and three scores. Shedrick Jackson is the leading returning receiver, with 40 receptions for 527 yards and a touchdown last season.

Auburn’s offensive line took a hit this week when center Nick Brahms retired from football due to lingering knee issues. The sixth-year senior started 33 games the past four seasons, including 28 consecutive starts between the middle of the 2019 campaign and last year’s Iron Bowl against Alabama. He had been limited during workouts and Tate Johnson has been running with the first team at center.

Mercer (1-0) went 7-3 overall and 6-3 in the Southern Conference last season and heads to The Plains with momentum after opening the season with a 63-13 win over visiting Morehead State on Saturday.

Fred Payton went 11-for-17 passing for 248 yards and four touchdowns, including three to Ty James, who had five receptions for 192 yards. Austin Douglas rolled off touchdown runs of 65 and 56 yards on his first two carries, finishing with 140 yards on five carries. Devron Harper also returned a kickoff 93 yards for a touchdown as the Bears scored seven times from beyond 25 yards out.

“What you find out is that when you really execute at a high level, and you do things the way you’re coached to do, you generally are able to have some success,” Mercer coach Drew Cronic said. “It’s good for you.

“Our guys will be excited, they’ll play their tails off.”