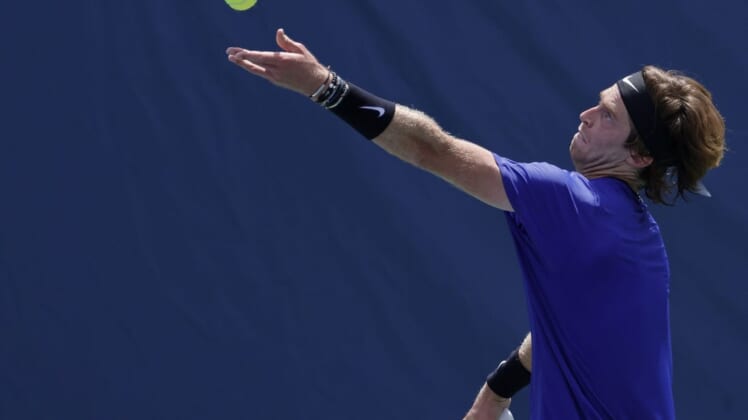 Top-seeded Andrey Rublev of Russia and recent Wimbledon finalist Nick Kyrgios of Australia both won two matches on Friday to reach the semifinals of the Citi Open in Washington.

The tournament’s schedule was compacted due to previous weather-related suspensions and postponements.

Kyrgios led fourth-seeded Reilly Opelka of the United States 7-6 (1), 2-1 when their match was halted on Thursday, and the Aussie came back to finish a 6-2 victory in the second set. He faced a much tougher test later against 10th-seeded Frances Tiafoe of the United States before prevailing 6-7 (5), 7-6 (12), 6-2.

Tiafoe squandered five match points in the second set before Kyrgios leveled the match on his fourth set point.

Kyrgios’ semifinal foe will be Sweden’s Mikael Ymer, who defeated the United States’ Sebastian Korda 6-2, 5-7, 6-3 in the quarterfinals. Earlier, Korda completed a suspended match against fifth-seeded Grigor Dimitrov of Bulgaria, taking a 4-6, 6-1, 6-2 win.

Top-seeded Daniil Medvedev of Russia got hot mid-match and rolled to a 7-6 (0), 6-1 win over fourth-seeded Miomir Kecmanovic of Serbia in the semifinals at Los Cabos, Mexico.

Medvedev won the last 11 points of the first set, then jumped out to a 3-0 lead in the second set and was never threatened.

Medvedev will match up against third-seeded Cameron Norrie of Great Britain in the final. Norrie defeated second-seeded Felix Auger-Aliassime 6-4, 3-6, 6-3 in the other semifinal.

Norrie has been in three previous finals this year, and he won twice. Medvedev has lost his past five championship matches, including last year’s ATP Finals and the Australian Open in January.