Atlantic League to move mound back for MLB experiment 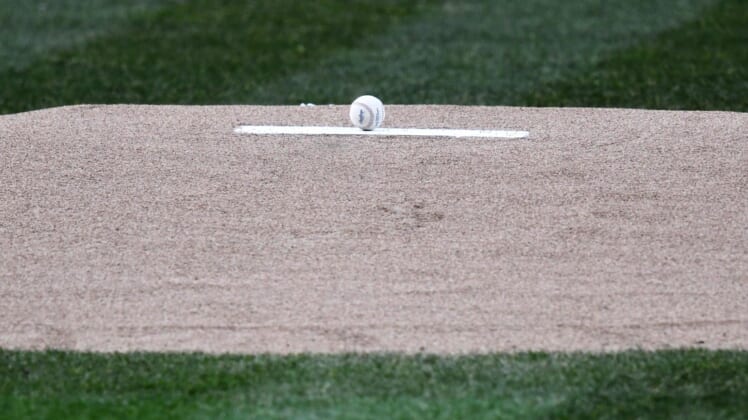 Apr 13, 2018; Cleveland, OH, USA; General view of a game ball on the pitcher’s mound before a game between the Cleveland Indians and the Toronto Blue Jays at Progressive Field. Mandatory Credit: David Richard-USA TODAY Sports

The pitching rubber will be bounced back a bit this summer in an experiment at the minor league level that will be implemented in conjunction with Major League Baseball.

Instead of the regular 60 feet, 6 inches between the top of the mound and home plate, as is standard from high school play up through professional baseball, MLB will ask the independent Atlantic League to move its mound back to 61 feet, 6 inches.

The change will be made only for the second half of the season with data being compared against data from the first half when the mound will be at the regular distance.

“We expect to learn a great deal about the impacts of such a change and whether an adjustment to this critical field dimension is worth potential future consideration at other levels of professional baseball,” said MLB rules consultant Theo Epstein, former president of baseball operations for the Chicago Cubs.

In another experiment, Atlantic League managers will have to consider a “Double-Hook” rule where a team would lose its designated hitter once the starting pitcher is removed from the game. Relief pitchers or pinch hitters would then hit in the spot for the remainder of the game.

MLB has used the Atlantic League to test new rules concepts, including an electronic system to call balls and strikes.

The Atlantic League was the first to use the three-batter-minimum rule for relief pitchers that is now in use at the MLB level. It has also tested larger 18-inch bases, as well as defensive positioning restrictions, both of which will be used in affiliated minor league play this season.

The goal of moving back the mound ever so slightly would be to assist the overall offensive flow of the game. Strikeouts have gone up in every season since 2005 as velocity has increased. According to MLB data, the strikeout rate was 16.4 percent in 2005 and is 24.9 percent through the first few weeks of the 2021 season.

The “Double-Hook” rule would give managers incentive to leave starters in games longer. According to mlb.com, identifiable starters, considered “workhorses” that fans identify with, are good for the sport.