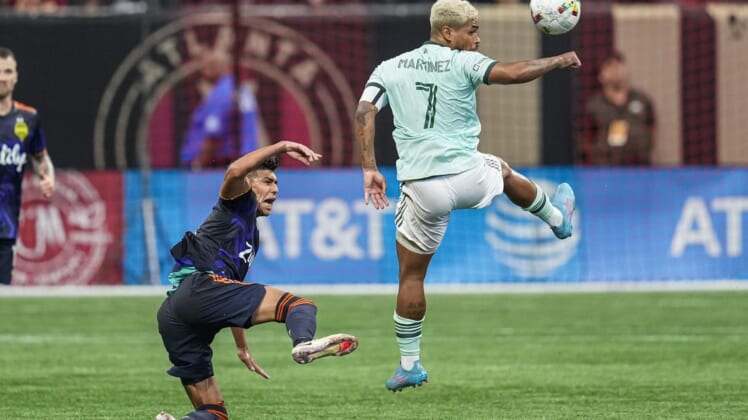 The quickest way for Atlanta United to climb into an Eastern Conference playoff spot is to beat the teams ahead of them.

Atlanta is 13th in the conference entering the weekend, four points below the playoff line (seventh place) with nine games left. However, a win would narrow the gap with the fifth-place Crew.

“The team is very enthusiastic, very motivated to make the playoffs,” Atlanta midfielder Santiago Sosa said. “That was our goal since the beginning of the season, so we’re very focused on doing that.

“We know that they’re a good team and that it’s going to be a difficult game, but we’re trying to focus on what we need to do.”

What Atlanta must do is get the ball in scoring positions for Josef Martinez, who in a 2-1 loss to the New York Red Bulls on Wednesday scored his 100th MLS goal (regular season and playoffs) in his 136th game. He became the fastest player to reach the century mark, surpassing Bradley Wright-Phillips (160 games).

“They have dangerous players who can change a game in a moment,” Crew midfielder Darlington Nagbe said. “That’s the biggest issue, when you come across a front four like they have.”

“It was gutsy,” Nagbe said. “Everyone performed, everyone worked hard and defended. It showed we could play that way and win that way and get results on the road.”

The Crew have been bolstered by the return of midfielder Artur, 26, who missed two months with a lower leg injury. He has started the past two games over Aidan Morris, 20.

“Aidan’s the future,” Crew coach Caleb Porter said. “But you can’t forget that Artur’s a very good player and has been a starter here and has been one of the best midfielders in the league.”