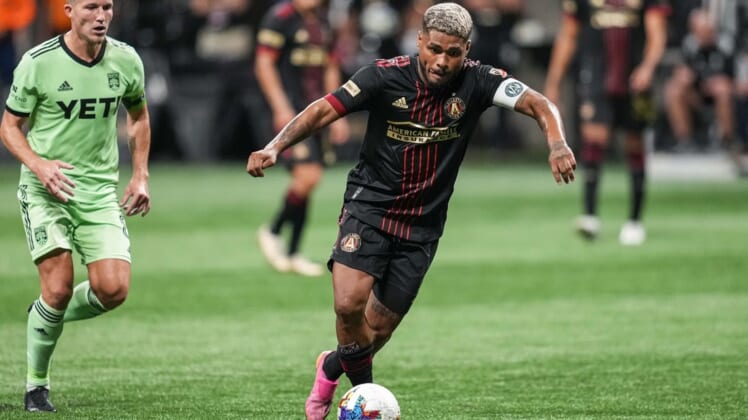 Desperate for a victory, Atlanta United will host Real Salt Lake on Wednesday night at Atlanta.

Atlanta United (5-8-5, 20 points) are winless in their last four league matches (0-3-1) and have been outscored 9-4 during that stretch. The Five Stripes’ most recent defeat came at home on Saturday, falling 3-0 to Austin FC.

The defeat sparked a postgame rant from Atlanta star striker Josef Martinez, in which he said injuries were no excuse, and hinted that Atlanta needs a culture change.

“We are professional. These are not kids anymore. If you come here, you need to know what to do,” Martinez said. “Nothing that happened tonight was a surprise. … We all have to think hard about what we saw here today. It could be my last year here. I’ve got one year on my contract left.”

Atlanta added some additional offensive firepower on Tuesday, announcing the signing of Colombian winger Edwin Mosquera. The Five Stripes acquired the 21-year-old from Deportivo Independiente Medellin in Colombia and signed him to a four-year contract. The club said in a statement that Mosquera is immediately available for selection, meaning he could make his MLS debut on Wednesday.

“Edwin is an exciting winger with a unique profile and is someone who will bring a different dynamic to our team,” Atlanta technical director Carlos Bocanegra said in a statement.

While Atlanta finds itself below the playoff line in the Eastern Conference, Real Salt Lake (8-5-6, 30 points) is in third place in the Western table.

Five different RSL players have scored at least three goals this season, and goalkeeper Zac MacMath is tied for third in the league in shutouts (seven), fifth in save percentage (73.3) and second in saves (66).

MacMath, 30, has been in MLS for 12 seasons, but his 19 starts this season are the fourth-most he’s ever had in a single campaign.

“There probably weren’t a lot of expectations for me at the beginning of the season,” MacMath said. “And I think it’s about making a point to each other and ourselves to prove people wrong across the league.”