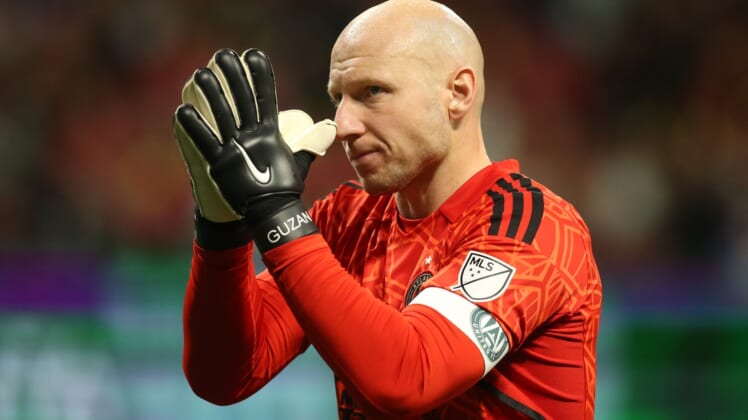 Atlanta United is awaiting an official diagnosis of the injury sustained by goalkeeper Brad Guzan on Saturday night, but fears are it’s a serious Achilles injury.

He was taken off the field by stretcher in the 73rd minute of Saturday’s scoreless draw against FC Cincinnati.

“I don’t want to talk about the details about the injury, but it doesn’t look good,” coach Gonzalo Pineda said after the game. “That’s why I’m sad, it’s not about the result or the performance, it’s about Brad’s injury. I have to wait for the scans and tests that they are going to do. No, it was not a knee injury, it was an Achilles injury.”

Guzan came off his line to stop a long ball from FC Cincinnati, fell over awkwardly on the non-contact play and pounded the turf. Bobby Shuttleworth replaced him in the match for Atlanta United (3-2-2, 11 points), which also has fellow goalkeeper Dylan Castanheira sidelined long-term due to a ruptured left Achilles tendon.

“Brad is our captain, our leader, our heartbeat,” defender Andrew Gutman said. “It didn’t look good on the field obviously. We don’t know what the scans will be, but it’s a huge loss for us.