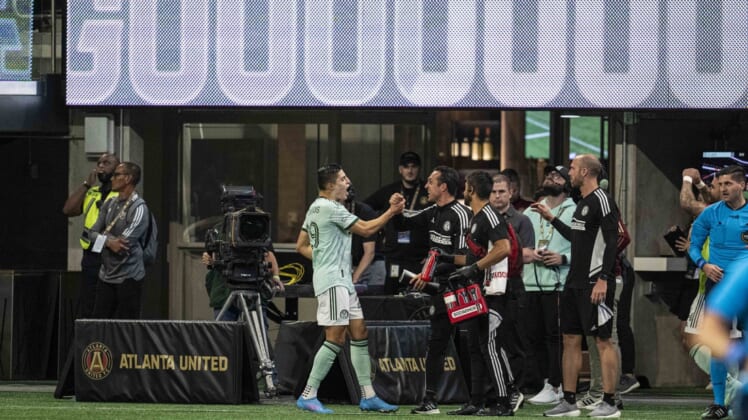 Atlanta (5-4-2, 17 points) continued their strong start at home, improving to 4-0-2 at Mercedes-Benz Stadium and extending their home unbeaten streak to 12 games.

Yet it wasn’t a perfect day for United, as center back Miles Robinson — a regular for the US Men’s National Team — was stretchered off in the 14th minute with a non-contact leg injury. Atlanta coach Gonzalo Pineda said after the match, “I think it’s going to be a bad injury … I hope it’s not. Let’s see after the tests. But a very unfortunate injury.”

Cisneros gave the hosts the lead in the third minute, timing his run nicely to stay onside then finishing off a wonderful Atlanta passing sequence by hammering the shot off the underside of the crossbar and into the net.

It took the Fire (2-4-4, 10 points) eight minutes to respond. Xherdan Shaqiri recycled a failed clearance off a corner kick and whipped in a cross that took a slight deflection — right into the path of Chinonso Offor, who made no mistake and put it home.

Cisnero scored again for first professional brace in the 27th minute to make it 2-1 for the hosts. Chicago goalkeeper Gabriel Slonina parried a low, hard shot by Thiago Almada right into the path of the onrushing Cisnero, who broke open when his marker slipped and fell in the box.

In the 36th minute, Cisnero made it 3-1 after getting behind the defense and rounding Slonina. It was Atlanta’s first hat trick since July 21, 2018, by Josef Martinez. Cisnero now has four goals on the season.

Mercedes-Benz Stadium continues to be a house of horrors for the Fire as they failed again to take a point in Atlanta and are now 0-5 in the building and have been outscored 15-3.

Atlanta spent the majority of the second half playing keep-away, dominating possessions for long stretches and weathering the few chances the Fire got off Atlanta turnovers.

The Fire managed to get into Atlanta’s box on a few occasions during the second half but never troubled Bobby Shuttleworth until the very end of the game.

The injury concerns continued to mount for Atlanta as Caleb Wiley, who was brought on as a second-half substitute, had to be subbed off in the 81st minute.

Brooks Lennon made it 4-1 for the hosts in the first minute of stoppage time, pouncing on an attempted clearance and burying it in the top corner.