After an inspired finish to the regular season and a run to the Eastern Conference Finals, the Atlanta Hawks are giving interim head coach Nate McMillan the full-time gig.

Shams Charania of The Athletic reported the news, which doesn’t come as a surprise in the least, and ESPN insider Adrian Wojnarowski provided more details:

McMillan took over a divided Hawks squad and helped them to a 27-11 record to finish the 2020-21 campaign. Atlanta earned the East’s No. 5 seed, and promptly defeated the New York Knicks in five games to open its playoff run.

It only got better from there, as the Hawks upset the top-seeded Philadelphia 76ers and served as the catalyst for Ben Simmons trade speculation.

Although Atlanta sputtered out against the Milwaukee Bucks, the franchise was only two wins away from the NBA Finals. That was with superstar guard Trae Young getting injured down the stretch, and going most of the way without two key wing defenders in De’Andre Hunter and Cam Reddish.

It’s obvious that the Hawks have a talented young core in place, but McMillan got more out of them than anyone believed to be possible. 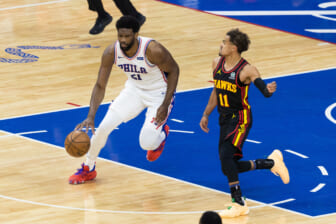 Strengthening McMillan’s candidacy for the full-time job even more is the fact that he has prior head coaching experience, first with the Seattle SuperSonics, then with the Portland Trail Blazers and Indiana Pacers.

This situation in Atlanta is probably the best set of circumstances McMillan has inherited in his career. Seattle’s franchise moved, Portland had brutal injury luck with its biggest stars, and Indiana had a clear ceiling when McMillan took over in what proved to be Paul George’s final season with the Pacers.

It’s possible that these young Hawks take a step back next season, but with so many promising young players in place who figure to improve and grow from their postseason experience and McMillan at the helm, maybe it’s unwise to write them off so quickly.