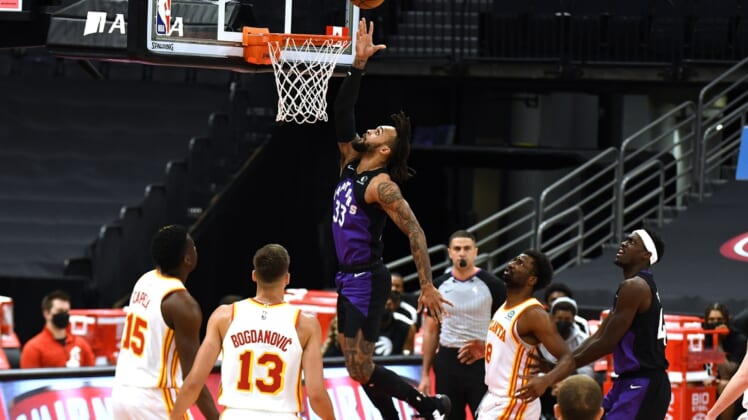 Bogdan Bogdanovic scored 23 points and the visiting Atlanta Hawks held on to defeat the Toronto Raptors 108-103 Tuesday night at Tampa.

Clint Capela added 19 points and 21 rebounds for the Hawks as they completed a three-game season sweep over the Raptors.

Toronto made it close at the end, cutting a 14-point deficit to two in the final minute.

Brandon Goodwin scored 18 and Kevin Huerter added 17 for the Hawks, who have won seven of their past eight games.

Pascal Siakam scored 30 points with seven assists and six rebounds for the Raptors. Rookie Malachi Flynn added a season-best 22 points while OG Anunoby had 15 and Khem Birch had 13 points.

The Hawks took a 12-point lead into the fourth quarter. The Raptors cut the margin to nine before Capela’s dunk bumped the lead to 13 at 97-84 with 6:53 left. Flynn’s 3-pointer shortlyafterward cut the margin to eight.

Goodwin’s 3-pointer increased Atlanta’s lead to 14 with 4:08 remaining. But Flynn hit a 3-pointer with 1:12 left to cut the lead to eight points at 105-97. Flynn made two more 3-pointers to cut the margin to two points with 19.8 seconds to play. Goodwin made two free throws to boost the margin to four.

Bogdanovic’s 3-pointer with 4:29 to play in the first half increased the Hawks’ lead to 50-39. The lead reached 15 on Solomon Hill’s 3-pointer with 2:49 to play. After the Raptors sliced the margin to 10, Huerter completed the first-half scoring with a layup on Hill’s court-length pass and Atlanta led 66-54.

The Raptors scored the first six points of the second half. Huerter’s 3-pointer restored the 12-point lead to 79-67 with 5:29 remaining in the third quarter. After the Raptors cut the lead to seven, Atlanta then went on a 7-0 run. The Hawks led 90-78 after three quarters.