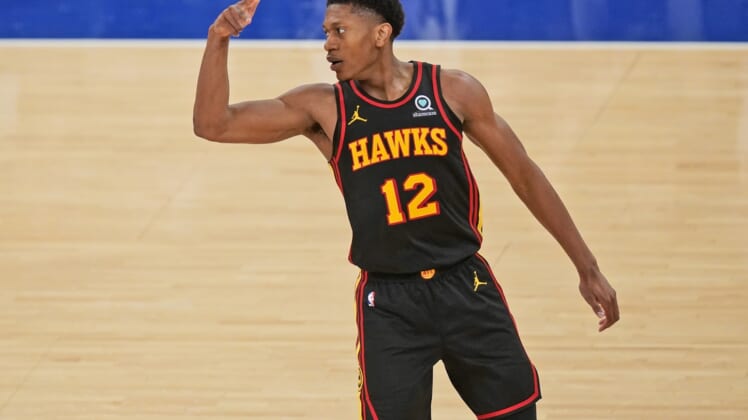 May 23, 2021; New York, New York, USA; Atlanta Hawks forward De’Andre Hunter (12) celebrates a three-point basket against the New York Knicks during the second half in game one in the first round of the 2021 NBA Playoffs at Madison Square Garden. Mandatory Credit: Seth Wenig/Pool Photo-USA TODAY Sports

“Hunter will miss the remainder of the postseason and is expected to make a full recovery in advance of training camp,” the Hawks said in a statement.

The Hawks announced last week that Hunter would require surgery.

Hunter started all five games of Atlanta’s first-round playoff series against the New York Knicks, but began to experience swelling in his knee ahead of Game 1 against Philadelphia in the conference semifinal.

He had arthroscopic surgery plus a nonsurgical procedure on the same knee during the regular season and missed three months of action because of discomfort and swelling.

The fourth overall draft pick in 2019 out of Virginia, Hunter played just 23 games (19 starts) in his second NBA season and posted averages of 15.0 points, 4.8 rebounds and 1.9 assists per contest while shooting 48.4 percent from the field.