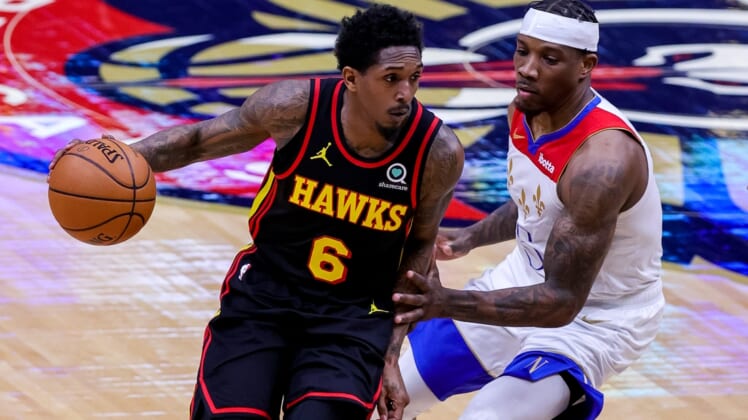 The Atlanta Hawks will try to extend their three-game winning streak and complete a season sweep over visiting New Orleans on Tuesday night, but a win could be tougher to come by.

The Pelicans are healthier than they were Friday, when the Hawks trounced them 126-103 with a big second half. The Pelicans played that game without four starters — Zion Williamson, Brandon Ingram, Lonzo Ball and Steven Adams. Ball and Adams returned Sunday in the 122-115 win over the Houston Rockets, while Williamson (sprained right thumb) and Ingram (toe) remained sidelined.

Young might have injured his right elbow on Sunday. He took a hard fall and had to leave the game and have a wrap applied. He wound up playing only 28 minutes and scoring 13 points; he averages 34.3 minutes and 25.2 points.

Lou Williams has been a key acquisition for the Hawks since he was obtained from the Los Angeles Clippers at the trade deadline. He scored 15 points on Sunday and took over at point guard when Young had to go to the bench. The veteran provided some calming leadership over the final eight minutes when the game against the Warriors could have gone either way.

“That last three or four minutes … we need to get better down the stretch,” Williams said. “We’ve got such a high-powered offense, everybody can score, and sometimes its about the quality of the shot. These guys play with a tremendous amount of confidence and I look forward to seeing what we can do.”

The Pelicans were happy to get Ball back in the lineup. He scored 27 points and made a career-high eight 3-pointers in the win on his return after missing seven games with a hip injury. He added nine assists.

“What Lonzo has done over the past two years to improve his shooting is one of the best stories in the league. That’s a hard thing to do,” New Orleans coach Stan Van Gundy said. “He made a total overhaul of his shot. Now he’s just a great shooter.”

The Pelicans have been without the firepower of Williamson for three straight games. Since Feb. 3, Williamson is averaging 28.3 points on 65.2 percent shooting, 6.7 rebounds and 4.4 assists. He has scored 20-plus points in 24 straight games, the longest streak in NBA history for a player younger than 21.

New Orleans will determine the availability of reserve Nickeil Alexander-Walker on Tuesday. He injured his lower left leg in the second quarter, stuck around to attempt two free throws, but went to the bench and sat out the rest of the game. He had started seven straight games while Ball was out.

Atlanta and New Orleans did not play last season; both games were wiped out by the COVID-19 pandemic. The Hawks have won four of the past five meetings and seven of the past 10.