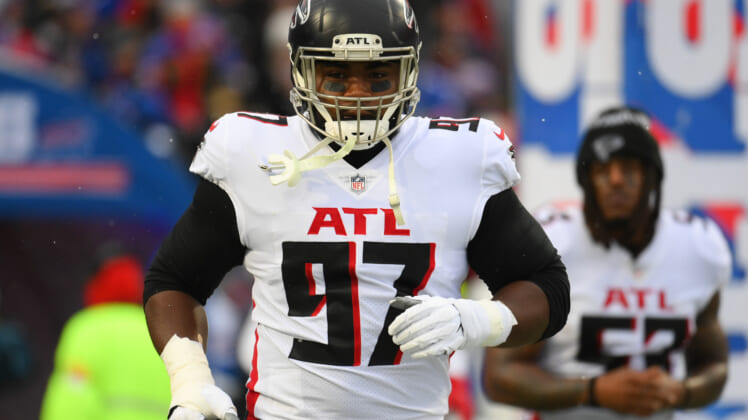 Before the 2022 NFL Draft began, there were some questions surrounding defensive tackle Grady Jarrett’s future with the Atlanta Falcons. With just one more year on his contract before hitting free agency, some wondered whether a trade made more sense to acquire talent that fits a future timeline when the Falcons may be more competitive.

Once coach Arthur Smith made a few cryptic comments about Garrett and his standing with the team, the fuel for the fire was poured. Instantly trade rumors began to spew, but Falcons fans can rest easy now that the flames have died down.

According to Ian Rapoport of NFL Network, Jarrett has just agreed to a three-year extension worth up to $51 million. While further details are not yet available, this new contract is believed to lower his 2022 cap number which was set at $23.8 million for Jarrett. His new salary is undetermined at the time of this posting, but the contract will keep him in Atlanta through the 2024 season.

With Jarrett’s re-signing clearing up immediate cap space, here are three more moves the team should still make this offseason.

The Atlanta Falcons were wise to add to their receiving corps by selecting Drake London at No. 8 in the 2022 NFL Draft. He has a strong chance to immediately be the top wide receiver on the team, depending on how one classifies Kyle Pitts, but Marcus Mariota, Desmond Ridder, or whoever else will be under center needs more than two options on game day.

With Calvin Ridley potentially coming back in 2023, maybe they don’t want to swing for the fences, in an effort to add more youth. Instead they can turn to the veteran free agency pool, signing a proven target like Emmanuel Sanders, who still has plenty of speed, even at the age of 35.

Sanders may not be the most enticing receiver left on the free agent market, but he brings 12 years of NFL experience, including a Super Bowl ring. Having compiled 9,245 receiving yards in his career, Sanders might be the veteran this locker room needs. He may not help them reach the playoffs in the 2022-23 season, but the wisdom Sanders could share with their young receiving corps could prove to be much more valuable in the long run.

General manager Terry Fontenot recognizes the value of building the roster around his quarterback, hoping to help make his leader under center’s job easier. We saw that mindset play out by taking a wide receiver with their first pick in the draft. One area that still needs to be addressed is the offensive line play.

It may be too early to give up on 2021 third-round pick Jalen Mayfield, but after ranking 77th out of 82 guards according to Pro Football Focus a season ago, maybe bringing in some proven competition couldn’t hurt. Mayfield played 989 snaps at left guard as a rookie, committing nine penalties and allowing 11 sacks.

Compared to Spain who played 995 snaps starting at left guard for the Cincinnati Bengals, committing four penalties, allowing five sacks, finishing with a 72.3 PFF player grade. As you can see, adding Spain would be an immediate, yet drastic improvement over Atlanta’s in-house options.

The final piece of this puzzle includes improving a front seven that ranked dead-last in sacks per game, averaging just 1.1 QB takedown per contest in 2021-22. After largely failing to address this need over the offseason, it may not be too late to take a chance on a former Pro Bowl DE in a 3-4 system.

Sheldon Richardson has never quite lived up to his full potential as the 13th pick in the 2013 NFL Draft, but he can still prove effective specifically as a pass-rusher, but also holds his own in rush defense as well. With 33.5 sacks tallied in his career, Richardson could form a difficult duo with the freshly re-signed Grady Jarrett in the Atlanta trenches.