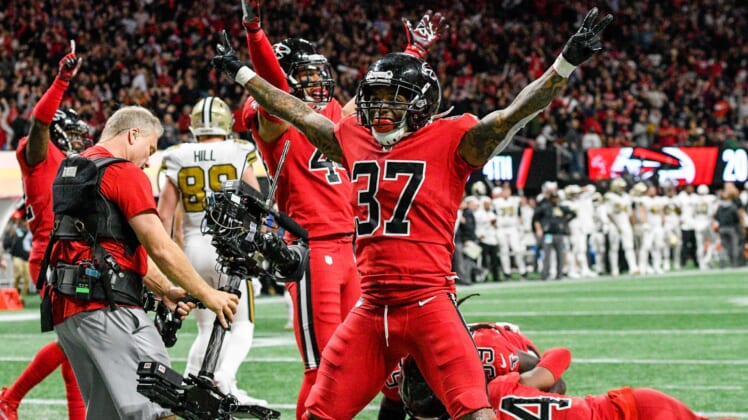 The Atlanta Falcons still have work to do to get under the 2021 NFL salary cap, but are making strides as of Thursday after releasing safety Ricardo Allen and defensive end Allen Bailey.

Allen and Bailey were both due to be unrestricted free agents next offseason, so instead of letting them play out their contract years, new general manager Terry Fontenot felt the financial resources were better off saved and spent elsewhere.

ESPN’s Adam Schefter reported the news of the Falcons’ transactions, which leaves and already-struggling defense without a starter in Allen and a key rotational player in Bailey.

Spotrac broke down just how much money the cost-cutting moves by Atlanta will save the team for 2021:

Allen is a versatile defensive back who can align at either safety spot or even cornerback in a pinch. He should be a coveted, bargain veteran player in the open market who could compete for a starting job among teams with a need at the safety position.

At 6-foot-3 and 288 pounds, Bailey is a threat from the inside on obvious pass-rushing downs, but he’s more of a situational player than a dependable down-to-down starter due to his inefficacy against the run. The Falcons’ produced only 29 sacks this past season, which was to blame for their last-ranked pass defense.

Bailey hasn’t been the same player the past two seasons in Atlanta since coming over from a successful finish to his time with the Kansas City Chiefs.

Still operating at a cap deficit against the league’s minimum $180 million allowance for the next year, Fontenot and the front office have their work cut out to get out of the red. They’re still projected to be somewhere in the neighborhood of $20 million over the NFL threshold at this point.

With the fourth overall pick in the 2021 NFL Draft, Fontenot hasn’t ruled out drafting a long-term successor to incumbent quarterback Matt Ryan.

Considering the Falcons are in cap-saving mode, and Matty Ice is due to be a $40.9 million hit in 2021, is it possible Atlanta could trade away its face of the franchise? It seems unlikely, as it’d put a lot of heat on Fontenot and new head coach Arthur Smith right away.

Smith is a savvy offensive mind as he proved during his time as play-caller for the Tennessee titans. Offense hasn’t been the issue, as Ryan continues to play at an above-average level and has weapons like Julio Jones and Calvin Ridley flanking him.

Where the big improvements need to happen is the defensive side of the ball. The faster the Falcons can find reinforcements there, the more likely they’ll soon return to competing for the playoffs.

Now that Atlanta has thinner depth in the secondary and on the defensive line, there must be a plan in place to acquire upgrades. Without a ton to spend on the free-agent market, it’d be wise for the Falcons to try swinging a draft day trade with the fourth pick. That way, Fontenot can have more selections — and cheaper contracts — to work with as he works to build out the defense.

Safety really stands out as a need now that Allen is gone and Keanu Neal is a free agent. Expect Atlanta to address that spot sometime in the first two days of the draft.