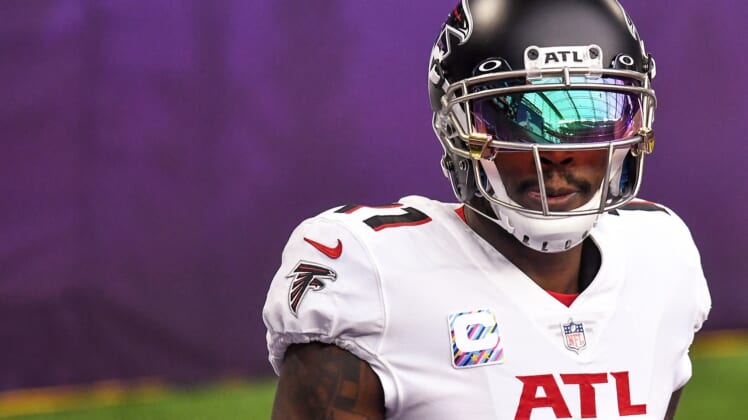 A decade after the Atlanta Falcons traded up for Julio Jones in the 2021 NFL Draft, the All-Pro wide receiver and future Hall of Fame inductee could be entering his final weeks with the organization.

The Falcons are in a difficult spot financially. Due to a series of bad contracts given out by the previous regime, new general manager Terry Fontenot walks into a challenging situation. Atlanta is less than $1 million under the 2021 NFL salary cap, not even enough room to sign their draft picks.

While there are a few contract restructures and cuts that could be made, one move stands out. Trading Julio Jones, which was on the table during the NFL Draft and is still being considered right now.

NBC Sports’ Peter King said that the Falcons could still trade Jones this season, with Fontenot potentially seeking a 2022 second-round pick in return for the All-Pro receiver.

While Atlanta would have loved to add another top talent via trade in Round 2, it didn’t make financial sense for the organization. Desperate for cap space, the best way to create savings is by trading Jones after June 1. If a deal is designated post-June 1, the Falcons create $16 million in cap space.

Will the Falcons trade Julio Jones?

Jones’s’ contract is what complicates a potential trade. There are only so many teams who have both the cap room to absorb his deal and the pressing need for a playmaker to move a valuable draft pick.

The New England Patriots ($12 million in cap space), Baltimore Ravens ($11.3 million) and Tennessee Titans ($5.2 million) are the most realistic fits. All three teams need a No. 1 wide receiver and are looking to add more talent to improve their rosters before the 2021 season.

There are other reasons for teams to be hesitant about moving a second-round pick for Jones. He played in just nine games this past season and soft-tissue injuries have become a recurring issue for him. The risk of re-injury or of his next franchise needing to be extra cautious with the 32-year-old make a blockbuster trade riskier.

With that said, this is one of the most talented wide receivers in the past 20 years. He finished the 2019 season with 1,394 receiving yards in 15 games and can’t be stopped in single coverage when he’s healthy.

A seven-time Pro Bowl selection, he is an outstanding weapon who can make any quarterback better. If the Falcons are committed to moving him, Jones will be playing for a new team next season.