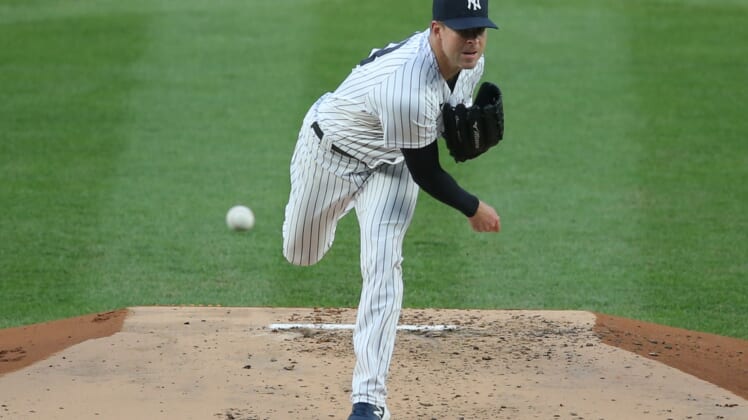 In his 10th career start and second against the Yankees, Anderson (1-0) allowed four hits and nearly equaled the longest outing of his brief career. The right-hander struck out four and worked around four walks in a 97-pitch outing.

It was Anderson’s second strong performance against the Yankees. In his major league debut Aug. 26 in Atlanta, he allowed one hit in six innings while opposing Gerrit Cole.

Two of those walks were in the seventh when Anderson issued free passes to Gary Sanchez and Clint Frazier. A.J. Minter replaced Anderson and two pitches to retire DJ LeMahieu and also stranded Aaron Judge in a scoreless eighth before Will Smith allowed an RBI single to Frazier in the ninth.

Riley opened the seventh with a single that dropped between first baseman Mike Ford and Judge in right field before scoring on a groundout by Marcell Ozuna. Riley then opened the ninth with his first homer of the season.

Atlanta took a 2-0 lead in the fifth by loading the bases on a single by Pablo Sandoval and two walks. Sandoval easily scored on a sacrifice fly by Ehire Adrianza and Atlanta added its second run when Ozuna drew a four-pitch walk off Nick Nelson.

A night after scoring twice in the eighth without a hit to snap a five-game losing streak, the Yankees were nearly blanked for the second time this season and dropped to 3-9 in their past 12 games since April 6. In windy 47-degree conditions, New York heard boos at times from the limited capacity crowd of 9,634 and by the ninth chants of “Fire Boone” could be heard from some fans who remained.

The Yankees also lost Gio Urshela in the seventh due to lower back tightness.

New York’s Corey Kluber (0-2) allowed two runs and two hits in a season-high 4 2/3 innings. He struck out two and walked four — one shy of his career high — in a 91-pitch outing.