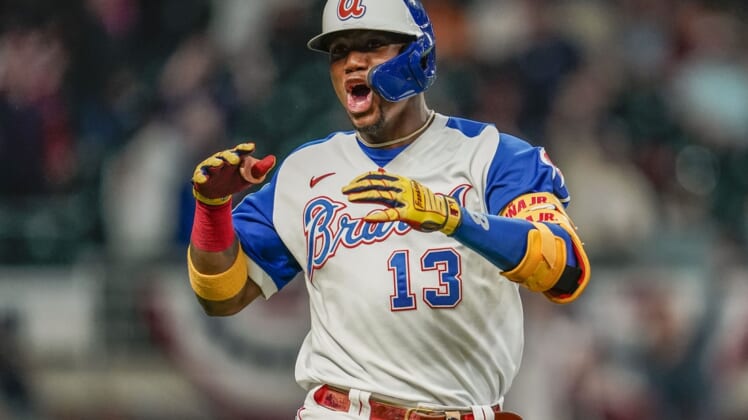 Atlanta Braves outfielder Ronald Acuna Jr., who leads the major leagues in hits, runs, home runs and slugging percentage, is listed as day-to-day after leaving Sunday’s game with an injury.

The Braves announced Monday that Acuna underwent an MRI exam that revealed a mild abdominal strain.

OF Ronald Acuña Jr. underwent an MRI today that revealed a mild abdominal strain. He is day-to-day.

Acuna, the 2018 National League Rookie of the Year and one-time All-Star selection, is off to a torrid start to the 2021 season. Batting leadoff in all 16 Braves games to date, Acuna has gone 26-for-62, scored 21 runs and added 16 RBIs. The Venezuelan has seven home runs, six doubles and one triple.

Along with his best-in-the-majors .887 slugging percentage, Acuna’s .419 batting average is second in the big leagues, behind only the New York Mets’ Brandon Nimmo.

In Sunday’s 13-4 win over the Chicago Cubs, Acuna left after 3 1/2 innings due to pain in his lower abdominal muscles, according to the team.

The Braves have a two-game series at the New York Yankees Tuesday and Wednesday, with days off both Monday and Thursday.