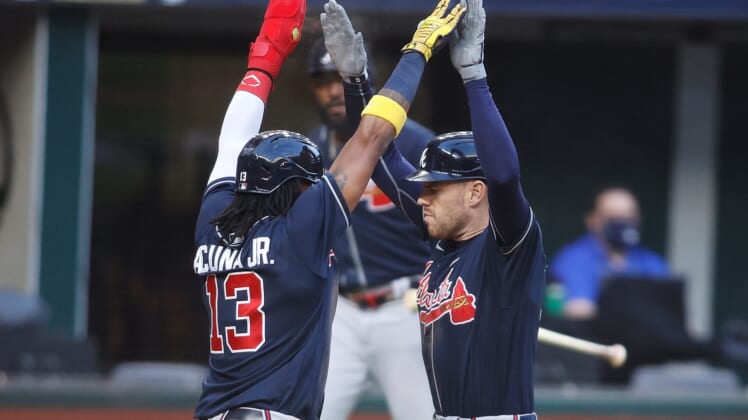 The Atlanta Braves certainly took notice when the New York Mets pulled off a blockbuster trade for Francisco Lindor. New York and its owner Steve Cohen made a statement to the MLB world, this team is ready to be a threat in 2021. With the gauntlet thrown down, the NL East just got a lot more interesting and competitive for the upcoming season.

If both teams do nothing else for the rest of the offseason, the Mets are now ready to challenge the Atlanta Braves for control of the NL East. Fangraphs’ 2021 ZiPS projections currently put them within a game of the Braves, with both teams comfortably ahead of the Washington Nationals and Philadelphia Phillies.

Nearly every NL East team is expected to add or have already landed key additions this offseason. Just recently, the Nationals acquired Josh Bell and signed Kyle Schwarber. While it’s conceivable Washington or Philadelphia will be contenders, the Mets and Braves easily boast the most talented rosters in the division. Where the Braves stand out over everyone, is their depth.

The Mets’ bench, after losing three infielders in Robinson Cano, Amed Rosario and Andres Gimenez, is very thin. The Braves, by contrast, have a large contingent of 25-and-under players who have either already blossomed into stars or were recently blue-chip prospects.

The Braves have 12 players 25-and-under who were top-100 prospects within the past three years. Their top three prospects—outfielders Christian Pache, Drew Waters and right-hander Ian Anderson—have all played in at least AAA. They also have a number of second-tier guys, such as catcher Williams Contreras, who already have some nominal big-league experience.

This kind of upside is crucial to weathering bad luck or injuries, the natural attrition of players over the course of a long 162-game season. It also gives them a leg up on bidding in trades during the year. Most importantly, these are the kinds of teams best suited to beat their analytics projections, which often don’t fully account for younger players’ upside.

The Mets’ lineup is deep but unbalanced. They stand to benefit greatly from another year of the DH in the NL, with Peter Alonso, Dominic Smith and J.D. Davis—a terrible defender nevertheless currently slated as their opening day third basemen—all suited to rotate in that role. As of now, though, there are no plans for the designated hitter to remain in the NL for the 2021 season. Luis Guillorme is not expected to be much of a hitter, but he has sneaky value as a gifted gloveman. As of now, the Mets are essentially bereft of upper-level prospects.

Until Noah Syndergaard is ready in June, the Mets don’t have any backup pitchers who project as more than replacement level, the baseline performance expected from any readily available minor leaguer. Franklyn Kilome and Sam McWilliams currently top their ‘sixth’ starter candidates. Kilome was terrible in a brief stint with the Mets last year and has never pitched in AAA, having spent all of 2019 rehabbing from Tommy John surgery. McWilliams similarly has only 44 ineffective AAA innings under his belt. His fastball ticked up last year at the Tampa Bay Rays’ B-squad camp, but his minor league numbers have been uneven and he’ll be 25 on Opening Day.

The Mets do have well-regarded prospects at the lower levels, and some break-out candidates and high profile Latin American signings; in other words, enough talent to swing a trade or two themselves to shore up the big league roster later on. However, Sandy Alderson has already expressed a strong desire to restore their minor league talent pipeline, and since current top prospects are all Alderson-era draftees or signings, they figure to remain Mets.

One wrench in the depth situation is the Mets’ potential ability to add payroll, beyond what Atlanta is willing to do. The Mets might be able to add solid MLB players, should the need arise, by taking on salary in lieu of true prospects. Even more unusual for the Mets, but a popular move among savvy teams, taking on big salaries and receiving high-end prospects for the favor. This is something the Braves did back in 2015, when they “traded” for Bronson Arroyo and his salary along with then-prospect Toussaint.

It would be a welcome change from years past, when the Mets were on the wrong side of salary dumps. New ownership, especially given Cohen’s love for the team, means far greater investment in everything it takes to build a great MLB team. For Mets fans, beyond the thrill of adding a generational talent like Lindor, it’s exciting to think about what new tools—more scouting of the minors, better analytics—they will now use to keep the team competitive.