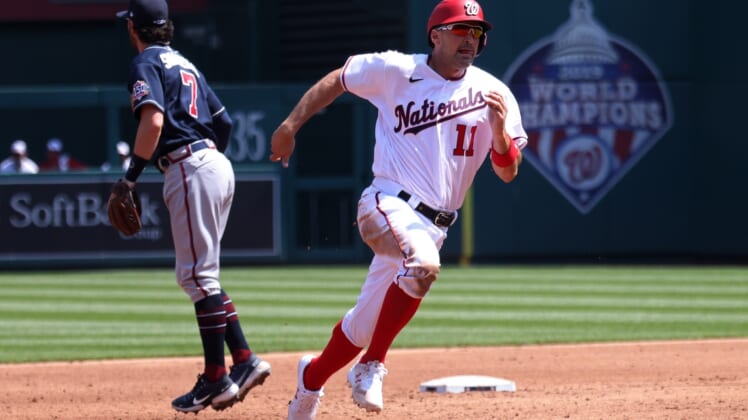 Ronald Acuna Jr. had three hits and scored twice to help the visiting Atlanta Braves to a 7-6 win against the Washington Nationals in the first game of a doubleheader on Wednesday.

Travis d’Arnaud added a two-run double for Atlanta, which won for the first time after losing four straight.

Trea Turner hit his second home run in two games and added a double for Washington. Starlin Castro had three hits and drove in three runs.

Josh Tomlin (1-0) pitched two scoreless innings of relief. Will Smith pitched the seventh inning for his first save, allowing an RBI double to Castro before getting Andrew Stevenson to hit into a game-ending double play.

Atlanta starter Max Fried allowed five runs on eight hits over two innings. He was struck on the right leg by a comebacker in the second inning. He finished the frame and was removed for a pinch hitter in the third.

The Braves took a 1-0 lead in the first when Acuna led off with a double and scored on a passed ball.

Washington quickly responded. After Victor Robles led off with a single, Turner homered, putting Washington in front. Juan Soto walked and Ryan Zimmerman doubled him to third. Castro’s single brought Soto home and Zimmerman scored on a sacrifice fly by Stevenson to make it 4-1.

Atlanta rallied in the second. Austin Riley singled leading off and Ender Inciarte doubled. Fried reached on an infield single, scoring Riley, and Acuna’s single to center scored Inciarte. After Acuna stole second, Fried scored on a groundout to tie the score.

After Freddie Freeman was walked intentionally, d’Arnaud doubled to center, scoring Acuna and Freeman to make it 6-4 and end Fedde’s day.

The Nationals pulled within 6-5 on Castro’s RBI-single in the second.

Atlanta added a run in the seventh when Ozzie Albies singled and later scored on a wild pitch by Wander Suero.