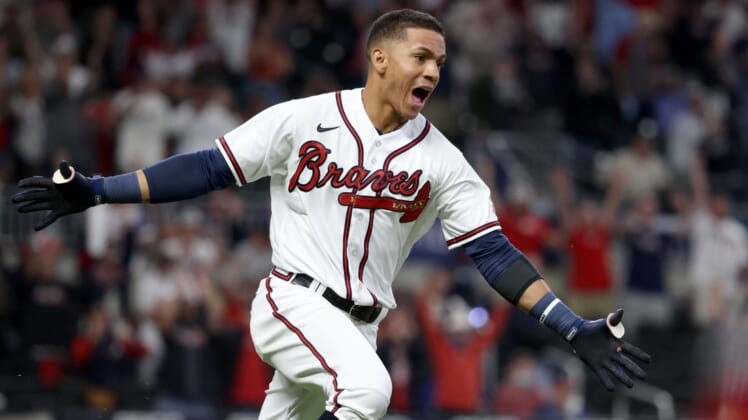 Atlanta’s Ehire Adrianza singled home the winning run in the 12th inning to complete a four-run rally as the Braves stunned visiting Philadelphia 8-7 to end the Phillies’ five-game winning streak on Saturday.

Adrianza lined a single to right field off reliever Matt Moore to drive in William Contreras with the winning run. Adrianza, who entered the game as a pinch-hitter in the seventh inning and stayed in when right fielder Ronald Acuna Jr. was hit by a pitch, was 3-for-3 with one RBI and scored a run.

The Braves, who trailed 7-4 going to the bottom of the 12th, tied it when Contreras lined a bases-loaded double to left field against Enyel De Los Santos (0-1).

In the top of the inning, Philadelphia scored twice when pitcher Jacob Webb threw wildly to home and another run J.T. Realmuto’s single.

Webb (1-1) benefited from the rally and earned the win.

The Phillies took a 4-3 lead in the top of the 11th on Nick Maton’s run-scoring double. But the Braves tied the game when Cristian Pache scored on a wild throw by shortstop Didi Gregorius.

The Braves dramatically tied the game with two outs in the ninth against Philadelphia closer Hector Neris. Adrianza coaxed a walk, and Pablo Sandoval squared it with his fourth pinch-hit homer of the season.

The Phillies scored twice in the first. Jean Segura hit a solo homer with one out, and another run scored on Alec Bohm’s fielder’s choice.

Philadelphia took a 3-0 lead in the second on Andrew McCutchen’s RBI single.

The Braves scored in the sixth when Freddie Freeman ended an 0-for-22 streak with his eighth home run, a solo shot to center field.

Acuna had to leave the game in the seventh inning after being hit on the left hand by a pitch thrown by Sam Coonrod. X-rays were negative, and Acuna is day-to-day with a pinky contusion.

Neither starting pitcher figured in the decision.