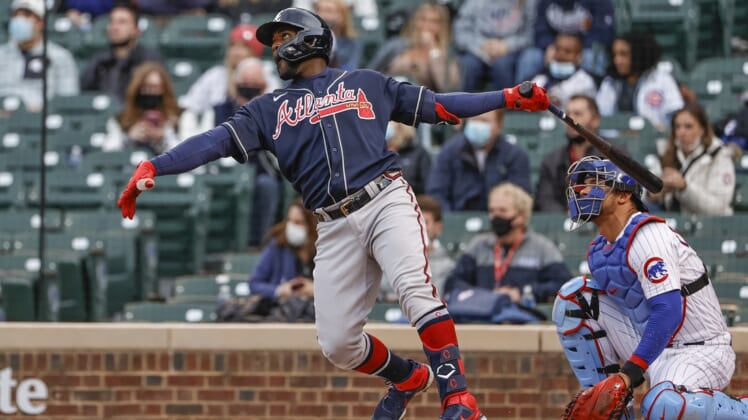 Freddie Freeman, Travis d’Arnaud, Ehire Adrianza and Guillermo Heredia connected for first-inning home runs against Kyle Hendricks and Heredia belted a sixth-inning grand slam to power the visiting Atlanta Braves to a 13-4 victory against the Chicago Cubs on Sunday night.

Atlanta used a 14-hit attack in the series finale to take two of three games in the weekend set, with Heredia setting the pace with a 3-for-4, six-RBI effort.

A six-run first inning established the tone as the Braves slugged four homers in an inning for the ninth time in franchise history and first time since the club accomplished the feat in the second inning of a June 11, 2019, game against Pittsburgh.

Hendricks (0-2) became the first pitcher in Cubs history to surrender four home runs in the first inning and the ninth all-time as his season ERA swelled to 6.92. He settled in somewhat following the Braves’ six-run barrage in the first, allowing seven runs on seven hits in four innings with three walks and two strikeouts.

Bryse Wilson pitched five innings of seven-hit, three-run ball (two earned) for Atlanta to earn his first victory of the season. Wilson (1-0) spaced one walk and one strikeout while throwing 50 of his 69 pitches for strikes. He allowed a solo home run to Anthony Rizzo and an RBI single to Javier Baez in a shaky first inning before recovering.

Rizzo’s solo home run leading off the third was the only other run Wilson allowed. Baez drove in the Cubs’ final run with an RBI double in the eighth. Baez, Joc Pederson and Rizzo had two hits apiece for Chicago.

Braves right fielder Ronald Acuna Jr., who left the game in the fourth inning with lower abdominal pain, was the lone Atlanta position player without a hit. The Braves batted around in the first and sixth innings.