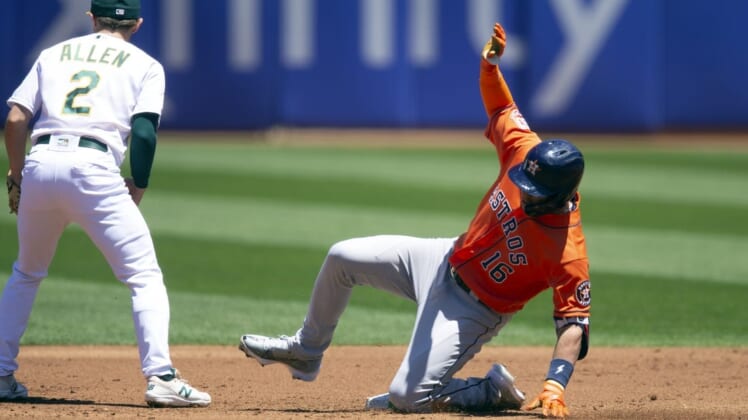 Oakland scored three consecutive runs in the fourth inning without hitting the ball more than 20 feet on Saturday afternoon and rookie Zach Logue combined with five relievers on a five-hitter as the Athletics stunned the first-place Houston Astros 3-2.

Having already been beaten four straight times at home by the Astros this season, the A’s trailed 2-0 when Sean Murphy led off the fourth with a single.

One out later, Elvis Andrus drew a walk from Houston starter Framber Valdez (8-4) and Stephen Piscotty followed with a single to load the bases.

Seth Brown then topped one 20 feet down the third-base line, prompting Astros catcher Martin Maldonado to leave the plate to retrieve it. But instead of going for a force out at any other base, Maldonado chose to attempt to tag Murphy, whose nifty slide eluded the out and produced Oakland’s first run.

Within the next three pitches, a passed ball on Maldonado allowed Andrus to score the tying run and a wild pitch by Valdez sent Piscotty scampering home with what turned out to be the game-winner.

Standing in for injured Frankie Montas, Logue (3-4) responded to a minor league call-up earlier in the day to throw five innings of three-hit ball. He allowed two runs, walking one and striking out two.

A.J. Puk, Domingo Acevedo, Zach Jackson, Sam Moll and Lou Trivino combined to throw the final four innings, with Trivino earning his seventh save by retiring Aledmys Diaz on a pop fly and pinch-hitter J.J. Matijevic on a liner to center after Houston had put two aboard in the ninth with one out.

The Astros scored their runs in the second after Yuli Gurriel singled and Diaz doubled.

Chad McCormick’s single opened the game’s scoring, after which Diaz scored on Maldonado’s grounder to first.

The double by Diaz was the only extra-base hit of the game for the Astros, who had built an 8-3 win in the series opener Friday around five doubles and two home runs.

Murphy finished with two hits for the A’s, who improved to 3-2 on a six-game homestand that concludes Sunday. One of Murphy’s hits was a double, Oakland’s only extra-base hit of the game.

Gurriel had two singles for the Astros, who out-hit the A’s 5-4.