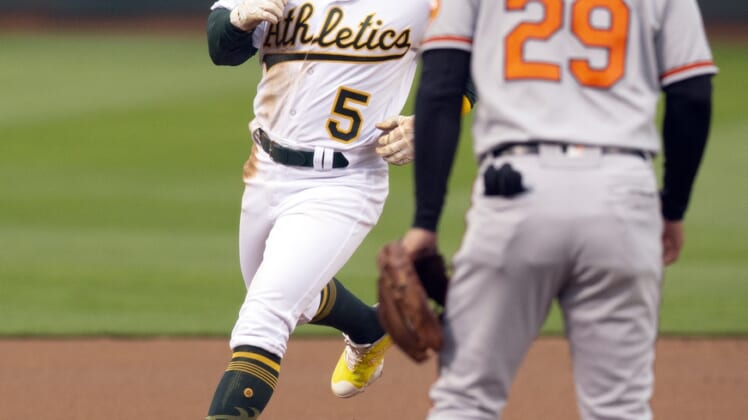 Frankie Montas limited the Baltimore Orioles to two hits over six innings and the Oakland Athletics took advantage of two errors to break a tie en route to a 5-1 victory in their home opener Monday night.

Sheldon Neuse had two hits, including one in a four-run sixth, as the A’s finally returned home after opening with 10 straight on the East Coast.

The subject of trade rumors since the start of training camp, Montas (2-1) focused on the task at hand in handing the Orioles a loss in the opener of their 10-game trip.

Montas took a no-hitter and 1-0 lead two outs into the fifth before Austin Hays doubled to right-center, scoring Rougned Odor, who had walked.

He was pulled after six innings, having walked two and struck out five.

By that point, the A’s had gone up 5-1 thanks to a four-run sixth that began with a pair of strikeouts.

Billy McKinney then singled off reliever Joey Krehbiel (1-1) and scored all the way from first when Orioles third baseman Ramos Urias threw wildly to first after fielding a potential inning-ending grounder off the bat of Christian Bethancourt.

Krehbiel then walked Seth Brown, after which he was replaced by Marcos Diplan, who served up an RBI single to Neuse that increased the lead to 3-1.

The inning’s second error, this one on second baseman Odor, allowed Brown to score the inning’s third run. When Cristian Pache followed with a single that scored Neuse, the A’s turned a 5-1 lead over to their bullpen.

Krehbiel was charged with the loss despite the fact all three runs charged to him were unearned.

Domingo Acevedo, Justin Grimm and Dany Jimenez wrapped up for Oakland with an inning of scoreless relief apiece, although Jimenez had to survive a bases-loaded jam in the ninth by striking out Ryan McKenna to end it as the potential tying run.

The A’s had taken their initial lead in the first after Orioles starter Spenser Watkins walked leadoff hitter Tony Kemp. He advanced to third on a one-out double by Sean Murphy and scored on McKinney’s grounder to shortstop.

Murphy’s double was Oakland’s only extra-base hit of the game among just five hits.

Urias and Hays collected two hits apiece, Cedric Mullins tripled, and Hays and Jorge Mateo had a double each for the Orioles, who outhit the hosts 7-5.