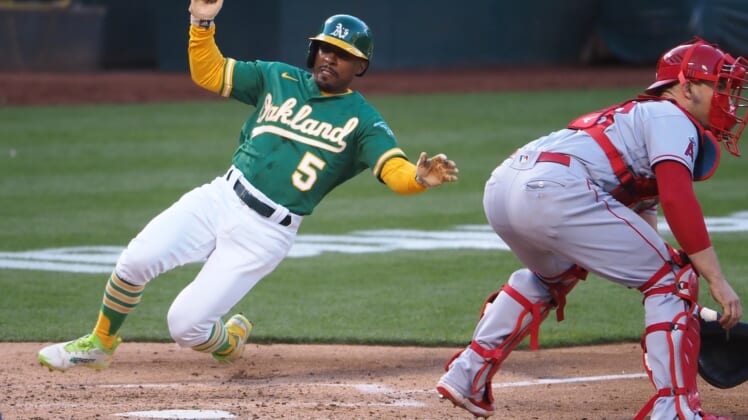 Sean Manaea (6-2) allowed one run on nine hits over 5 2/3 innings for Oakland, which has won four straight to improve to a season-high 14 games over .500.

Lou Trivino retired the Angels in order in the ninth for his 11th save in 13 opportunities.

The Angels grabbed an early lead on Juan Lagares’ solo blast with one out in the second, his first homer since he hit two in a game on Sept. 12, 2019.

Oakland answered in the bottom half with Murphy’s two-run homer off Dylan Bundy (1-7), who struggled in his first outing since ending a season-opening 10-start winless streak on June 7.

The Athletics added to their lead in the third, when they scored five runs and sent 11 batters to the plate.

Mark Canha was hit by a pitch to begin the inning and scored when Tony Kemp doubled to right field and advanced to third on an error.

After Kemp scored on a sacrifice fly, Jed Lowrie walked and Matt Chapman doubled for his eighth hit in his last four games.

Moreland then made the score 6-1 with a two-run single under the glove of second baseman David Fletcher.

Oakland added another run in the fifth when Chad Pinder’s double scored Murphy, who was hit by a pitch to begin the inning.

The Angels mounted a rally with four runs in the seventh. Jared Walsh delivered a two-run double and Lagares and Fletcher each added run-scoring singles.

Fletcher and Jose Iglesias had four hits apiece for the Angels, who out-hit the Athletics 14-9.

The Athletics were hit by a pitch four times, with Murphy being hit twice. Pinder exited the game in the seventh inning after being hit in the back of his head by a Junior Guerra pitch.