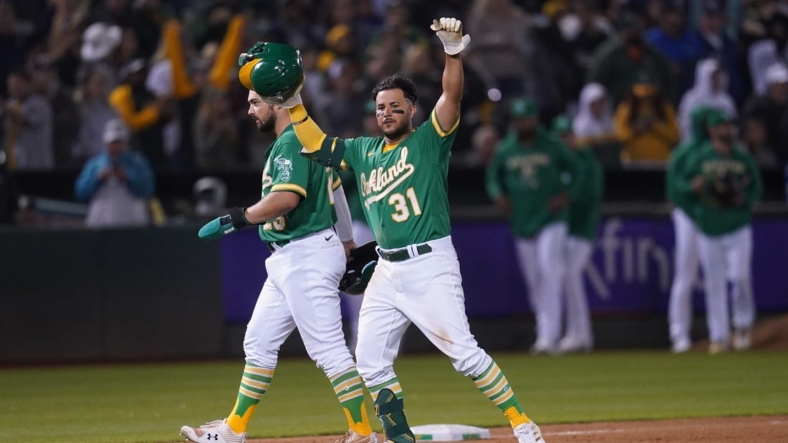 Relief pitchers were on the mound Saturday night when the A’s recorded a 3-2 win in 11 innings following a throwing error by New York second baseman DJ LeMahieu.

The Yankees posted a 13-4 victory in the series opener on Thursday and a 3-2 win on Friday.

Neither team had their closer available Saturday, and won’t for the series finale, either. New York’s Clay Holmes is sidelined with back soreness and Oakland’s Dany Jimenez has been ruled out for the season with a strained shoulder.

To add insult to injury, the Yankees disclosed Saturday that reliever Aroldis Chapman won’t be available for the series finale because of an infection in his leg caused by a recent tattoo.

Chapman hasn’t pitched in the Oakland series and is out indefinitely.

“We’ve got to get our arms around it and get the infection out of there,” Yankees manager Aaron Boone explained before Saturday’s game. “It’s gotten a little bit worse over the last two days.”

Boone was asked if he was disappointed an in-season injury could occur in this manner.

“That’s a personal choice … usually a pretty safe thing to deal with,” he responded. “This is more of an unfortunate situation that has turned into an infection. So my focus is on trying to get him right and healthy.”

After starter Domingo German threw 7 2/3 shutout innings Saturday, the Yankees saw three relievers combine to give up three runs over the final three innings. Two of the runs were scored by designated runners in extra innings.

A’s relievers fared better than their Yankee counterparts after starter Adam Oller limited the Yankees to a single hit in the first eight innings. New York scored twice in the 10th on an A.J. Puk wild pitch and subsequent throwing error by catcher Sean Murphy, but Oakland’s three relievers kept the visitors hitless for three innings.

The announcement on Jimenez came before Saturday’s game. He leads the A’s with 11 saves.

Oakland manager Mark Kotsay also said Zach Logue, who was originally scheduled to start Sunday’s game, would join the bullpen to provide added depth. His spot in the starting rotation will be taken by Adrian Martinez (2-3, 6.08 ERA), who is expected to be promoted from Triple-A Las Vegas in time for the series finale.

“We’ve got a good evaluation of Zach,” Kotsay explained of the move, which comes after Logue received a loss in each of his last four starts. “For Adrian, it’s his opportunity to come in and step into this rotation, get a continued look for his future and how he takes advantage of this opportunity that’s going to be given.”

Martinez last pitched in the majors on Aug. 7, allowing two runs in 4 1/3 innings in a 6-4 home loss to the San Francisco Giants. The 25-year-old right-hander has yet to face the Yankees in his career.

New York is slated to counter with right-hander Clarke Schmidt (5-2, 2.18), who will be making his first start since working three innings in a no-decision against the Tampa Bay Rays on June 16.

The 26-year-old has since made five relief appearances, recording two wins and two saves along with a 0.84 ERA. He pitched three shutout innings in his most recent outing, getting the win in relief in a 4-2 home victory over the New York Mets on Tuesday.

Schmidt has yet to face against the A’s in his career.