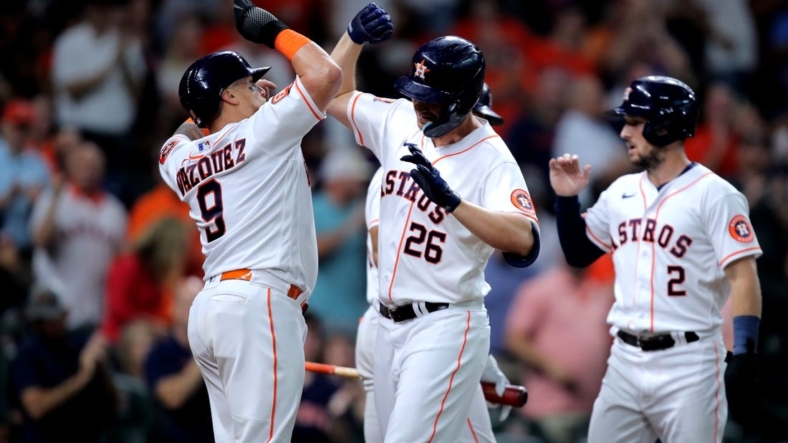 Trey Mancini capped a four-run first inning with a three-run home run as the Houston Astros finished off a season and series sweep of the visiting Minnesota Twins with a 6-3 victory on Thursday.

Mancini delivered the decisive blow against Twins right-hander Chris Archer (2-7), who surrendered five hits in the opening frame starting with a leadoff double to Jose Altuve. Archer appeared set to limit the damage when Yordan Alvarez rolled into a double play that scored Altuve, but Alex Bregman and Christian Vazquez recorded singles to set the table for Mancini.

Facing a 2-2 count, Mancini drilled a changeup 361 feet to left field, snapping a 1-1 deadlock. It marked his sixth home run in 18 games with the Astros.

Mancini has also added 16 RBIs in that span, which began when Houston acquired him from the Baltimore Orioles at the trade deadline on Aug. 1.

Bregman and Vazquez teamed up again in the third, with Vazquez following a one-out double from Bregman with a single to center that scored Bregman and upped the lead to 5-2. Archer lasted just four innings, allowing five runs on eight hits plus one walk with two strikeouts.

It marked the 17th time in 22 starts that Archer, who threw 88 pitches, posted fewer than 15 outs.

Astros right-hander Luis Garcia (11-8) needed the early run support. Minnesota earned its first lead of the series when second baseman Jorge Polanco clubbed a two-out home run to right in the top of the first.

It was his 16th dinger and gave the Twins a 1-0 lead. Nick Gordon tripled to center leading off the second and subsequently scored on a wild pitch to slice the deficit to 4-2.

Garcia never found his footing. He surrendered consecutive hits to Gary Sanchez and Gilberto Celestino to open the fifth, with Sanchez later scoring on a Luis Arraez sacrifice fly. Garcia allowed three runs on five hits and one walk with five strikeouts over five innings.

The Houston bullpen, shorthanded with closer Ryan Pressly (neck) on the injured list, picked him up.

Will Smith, Phil Maton and Hector Neris held Minnesota in check before Rafael Montero worked the ninth and recorded his eighth save. The Twins are mired in a season-long six-game skid.