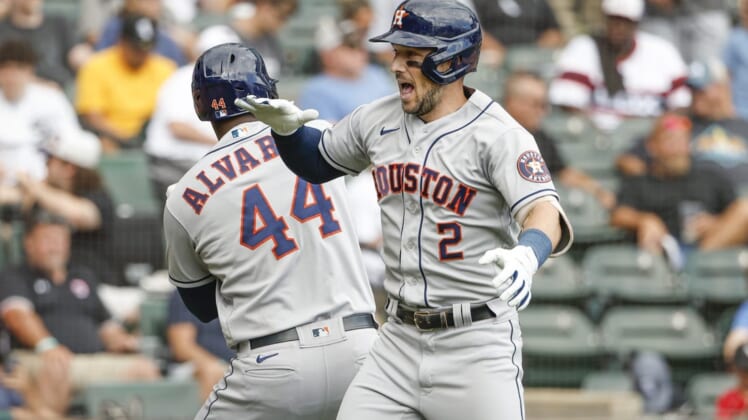 Alex Bregman clubbed a pair of two-run homers and had a career-high six RBIs as the Houston Astros routed the host Chicago White Sox 21-5 on Thursday afternoon.

The Astros posted the most runs by an opponent ever at Chicago’s ballpark, which opened in 1991.

Bregman belted a two-run homer during a six-run fourth inning and again in the sixth. The Astros set a season high for runs and matched the club record with 25 hits to split the four-game set after losing the first two. Bregman finished 4-for-6, adding two doubles.

Houston’s Kyle Tucker and Christian Vazquez also posted four hits apiece and combined for five RBIs. Chas McCormick had a late three-run homer with five RBIs as Houston made history in the ballpark.

Luis Garcia (10-8) yielded a three-run homer to Yoan Moncada, allowing seven hits while walking four and striking out four, in grinding out five innings for the Astros, who have won six of eight.

Houston roughed up Chicago starter Lucas Giolito (9-7), who allowed seven runs, eight hits and a walk while pitching into the fourth.

Gavin Sheets stroked a career-high four of the 11 hits by the White Sox, who also walked eight times but trailed 10-0 after four innings.

Trey Mancini sent a Giolito pitch just over the right-field fence in the second to open the scoring. The Astros added three more in the third, including a two-run double by Bregman and Tucker’s RBI single.

Giolito’s day ended without recording an out in the fourth, when he allowed an infield-RBI single to McCormick. With Vince Velasquez on the mound, Jose Altuve (two hits) delivered a run-scoring single, Yuli Gurriel (3-for-5) an RBI groundout and Yordan Alvarez an RBI double.

Alvarez came home on Bregman’s drive into the left-field seats to cap Houston’s breakout fourth. After Moncada’s three-run home run made it 10-3 in the fifth, Bregman belted his 18th homer the next inning.

It marked the eighth time this season Chicago has allowed 10 or more runs at home, where it hasn’t done so itself in 2022.