Astros Use Longball to Clobber Royals 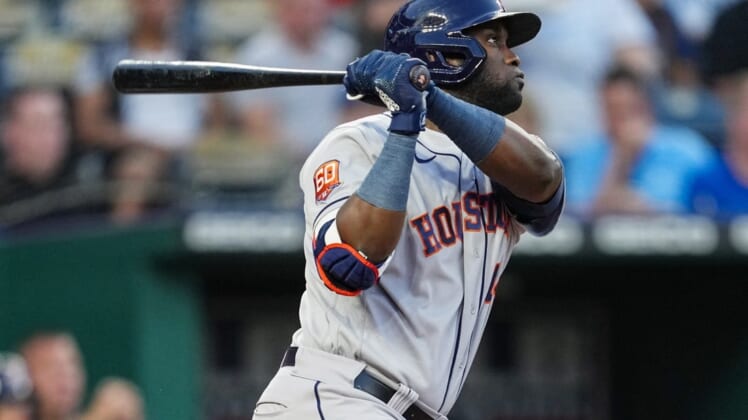 Aledmys Diaz hit the first of Houston’s three two-run home runs Friday night as the Astros defeated the Kansas City Royals 10-3 in the first game of a three-game series in Kansas City. Diaz was 3-for-5 with three RBIs.

Jose Urquidy (5-2) allowed three runs on five hits in six innings. He walked one and struck out six. After allowing a hit to the leadoff hitter, he didn’t allow another hit until the sixth inning, when he gave up the three runs.

Kansas City’s Brady Singer (2-1) got rocked. After three straight starts where he allowed a combined three runs on 14 hits over 19 2/3 innings, with 20 strikeouts and just three walks, he allowed seven runs on eight hits in five innings. Three of the hits were two-run home runs.

The Astros scored a pair of runs in the second on Diaz’s home run. Diaz launched a Singer sinker 413 feet into the seats in left center, scoring Yordan Alvarez.

Diaz collected another RBI in the fourth. He lined an opposite-field single to right with an off-balanced swing, driving in Yuli Gurriel. Gurriel reached base on an awkward swing himself, when he lined a double down the left-field line off his front foot.

Martin Maldonado hit a two-run home run with no outs in the fifth. His drive to straight-away center was just over the outstretched glove of Kyle Isbel. With two outs, Gurriel singled and Alvarez blasted one 427 feet to center.

The Astros continued the onslaught in the sixth. Jose Altuve drew a bases-loaded walk, Michael Brantley lined a single and Gurriel drew another walk to make the score 10-0.

The Royals finally got to Urquidy in the bottom of the sixth. Whit Merrifield recorded the Royals’ first hit since the first, followed by a double by Andrew Benintendi. Bobby Witt Jr. then put Urquidy’s first pitch into the fountains in left-center, 443 feet from home plate.