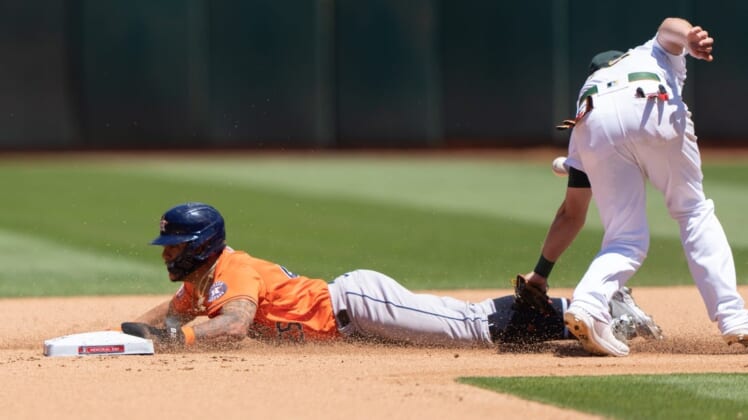 The visiting Houston Astros will have a rested bullpen and a surging power attack when they square off against the Oakland Athletics on Tuesday night in the middle game of a three-game American League West series.

Valdez allowed one run and just two hits, both in the sixth inning, in the Astros’ first complete game since June 2021. He threw a career-high 114 pitches, struck out seven and walked three. No Houston reliever even warmed up in the game, saving the Astros’ bullpen for the other games in the series.

Houston had just six hits off four Oakland pitchers — two hits each by Alvarez and Altuve — but that was plenty thanks to Valdez’s career-best outing.

“The main thing is we won the first game of the series,” Houston manager Dusty Baker said. “Oakland had a lot of guys (playing on Monday) that we didn’t know a whole bunch about, so we know more about them for tomorrow.”

Altuve was removed from Monday’s game after a collision at first base with the Athletics’ Christian Bethancourt in the seventh inning. Baker said he took Altuve out of the game because he didn’t like the way he looked in the dugout and that he’s made out two lineups for Tuesday — one with the All-Star second baseman and one without.

Javier is 1-2 with a 6.11 ERA in eight career games (five starts) against Oakland. He pitched in six games against the Athletics in 2021.

The A’s were anemic on offense Monday. Kevin Smith had a double in the sixth to break up Valdez’s no-hit bid, and Ramon Laureano promptly singled home pinch-runner Seth Brown to produce the only run for Oakland.

Oakland manager Mark Kotsay said Smith was taken out because of a knee contusion, which likely occurred on a diving play near the dugout. Smith will be day-to-day with the injury.

Oakland has dropped four of its past five games is 7-18 at home, tied with the Chicago Cubs for the fewest home wins in the majors.

Montas is 7-4 all-time against the Astros with a 3.48 ERA in 13 games, 11 of them starts. The seven wins are his most against any major league team. He struck out 11 in a no-decision against the Texas Rangers in his most recent start on Thursday.

“My arm was feeling very nice,” Montas said after that game. “I felt pretty good, man, with all of my pitches, especially my splitter. I had the splitter and the fastball both looking pretty good.”

Montas held the Rangers to four hits and a run in seven innings.

It was the ninth double-digit strikeout game of Montas’ career, tying him with Catfish Hunter for third on the all-time Oakland list behind only Vida Blue (21) and Barry Zito (11).