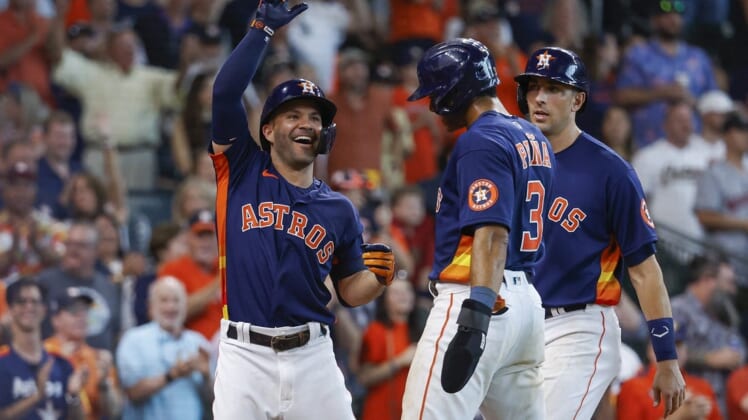 The visiting Houston Astros and Texas Rangers will both carry a bit of momentum when they square off Monday in the opener of a three-game American League West series in Arlington, Texas.

Both teams are coming off victories and have met eight times already this season, with the Astros winning six.

The Astros are coming off a 9-4 home win over Miami on Sunday as they salvaged the finale of a three-game series and snapped a three-game losing streak overall.

Houston amassed 14 hits, with Jose Altuve and Yordan Alvarez leading the way with three each. Altuve’s three-run home run in the eighth gave the Astros some breathing room amid making some fundamental errors.

“We are glad to get the win to end that losing streak because sometimes those can be a monster, and we needed to get that monkey off our backs,” Houston manager Dusty Baker said. “They say that there’s no such thing as an ugly win, but that one was pretty close to it.”

The Astros’ pitching was superb, as Justin Verlander picked up his eighth win of the season, allowing four runs — none earned — on three hits in seven innings.

“The guys swung the bats well today, and Justin was very good, and that all came together to get us the win,” Altuve said. “Our intensity was like it always is — we are never in any kind of panic mode because we know what kind of team we have. … Now we want to take some of this momentum with us to Dallas.”

Javier is 4-1 all-time against Texas with a 2.74 ERA in 10 appearances, including six starts. He is 1-1 vs. the Rangers, most recently losing on May 20 in Houston despite allowing just one run on three hits in six innings while striking out nine.

The Rangers return home for a quick three-game homestand after an 8-6 win in 12 innings win in Chicago over the White Sox on Sunday afternoon. It was the teams’ second straight extra-inning game, with Texas winning both in dramatic fashion.

On Sunday, Jonah Heim’s two-run single in the 12th provided the deciding runs for the Rangers.

Ezequiel Duran had a three-run home run in the 11th inning, and Eli White launched a two-run homer in the third and a sacrifice fly in the fourth.

“That was an amazing, hard-fought game, with both teams exhausting just about every option to win,” Texas manager Chris Woodward said. “We had a lot of chances (to build on our early lead), but Chicago kept us at bay. We made some mistakes but we made some great plays to win the game.”

White was forced from the game in the 11th when he collided with Charlie Culberson chasing a sinking liner into the left-center field gap. It went as a triple by Danny Mendick. White stayed on his back in the outfield for several minutes before walking off under his own power with a right-arm injury.

Hearn is 2-2 with a 3.62 ERA in nine games against Houston, including four starts. Both of the losses came this season. He allowed four runs on five hits in five innings on April 26 in Arlington, and four runs on six hits in 4 2/3 innings on May 22 in Houston.