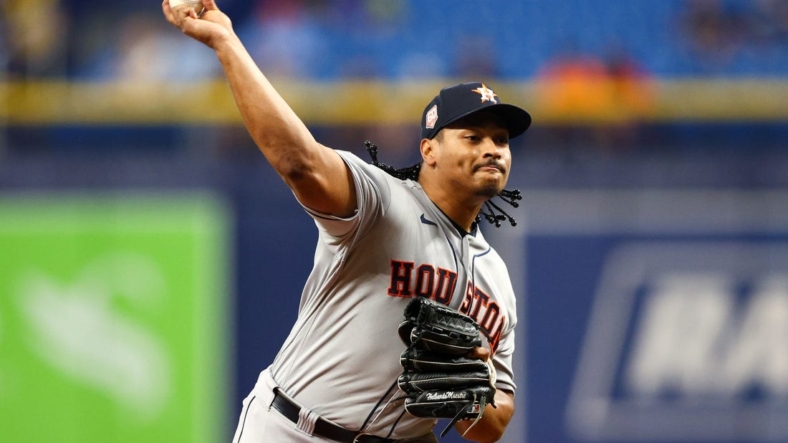 In the first 2022 meeting between the clubs, Altuve hammered a 3-1 four-seam fastball down the middle from Tampa Bay’s Drew Rasmussen (10-6) deep to left to open the game. The ball landed an estimated 410 feet away for Altuve’s 25th home run.

The blast was the 32nd career leadoff homer for Altuve, who went 2-for-4 with two runs.

In his 86-pitch start, Garcia (13-8) used his quirky, rocking windup to hold the Rays to just two hits. The right-hander fanned four and walked four.

Alex Bregman finished 2-for-4 with a two-RBI double as the Astros (97-51) breezed to their eighth win in the past nine games.

Harold Ramirez went 3-for-4 and set a career high by notching his 22nd double this season, but the Rays (82-65) mustered just five hits.

Over six innings, Rasmussen allowed four runs on six hits while striking out three and walking one.

Tampa Bay lost for only the fourth time in its past 20 home games.

Following Altuve’s leadoff homer, the Rays attempted to respond in their half of the first. Tampa Bay had runners on second and third with one out following a leadoff walk to Yandy Diaz, a single by Wander Franco and a wild pitch that advanced the Tampa Bay shortstop.

However, Garcia settled in and struck out Randy Arozarena swinging, then ended the threat by sawing off Ramirez’s bat and getting a lazy popup to shortstop.

After Rasmussen yielded three hits in the first, his dominant slider emerged and throttled the Astros’ offense. The right-hander got into a rhythm and recorded four perfect innings and 13 consecutive outs in all.

Houston got to him in the sixth. An infield single by Altuve and a walk by Jeremy Pena preceded Yordan Alvarez’s blistering RBI single to right that sent home Altuve.

On a 1-2 slider with the infield in, Bregman reached out, broke his bat on contact and looped a two-run double into shallow left for the final 4-0 margin.