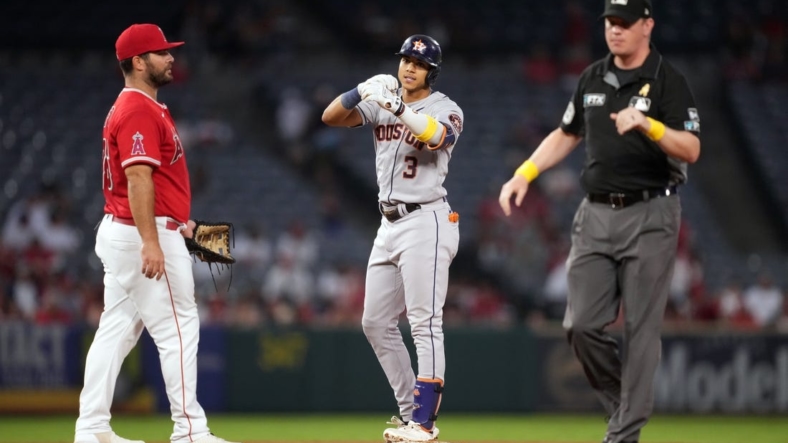 Jeremy Pena had two hits, including an RBI double, and the Houston Astros defeated the Los Angeles Angels 4-2 Friday night in the opener of a three-game series in Anaheim, Calif.

Houston’s Chas McCormick led off the third with a double to left and took third when Jose Altuve bounced a one-out single off the third-base bag. Pena double brought in McCormick, and Alex Bregman’s sacrifice fly plated Altuve.

McCullers worked out of a bases-loaded jam with two outs in the bottom of the third.

The Astros had runners at the corners with none out in the top of the fourth, but Detmers worked out of the threat with a foul out and two strikeouts.

Altuve led off the fifth with a walk. Bregman walked with one out and Kyle Tucker singled to load the bases. Jose Marte replaced Detmers and walked Yuli Gurriel to bring in a run. Yainer Diaz, making his major league debut, walked with two out to force in another run.

McCullers pitched around a pair of two-out singles in the bottom of the fifth.

Taylor Ward led off the bottom of the sixth with a single. Mike Ford walked and Matt Duffy hit an RBI ground-rule double. Matt Thaiss hit a sacrifice fly to end McCullers’ night in favor of Phil Maton, who got the third out.

Zack Weiss came on for Los Angeles to start the sixth and retired all four batters he faced before Aaron Loup replaced him with one out in the top of the seventh.

Hector Neris worked around a single and a walk in the bottom of the seventh.

Jaime Barria was perfect in the top of the eighth and ninth.

Bryan Abreu pitched a perfect bottom of the eighth with two strikeouts.

Rafael Montero pitched a clean bottom of the ninth with two strikeouts to earn his 11th save in 13 opportunities.

Astros designated hitter Yordan Alvarez was scratched from the lineup Friday with what was described as hand discomfort. He has missed four consecutive games with a sore hand.