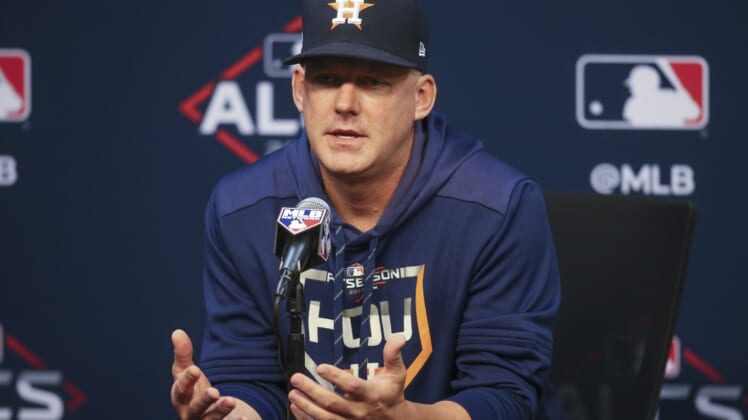 The Houston Astros are in the news for all the wrong reasons heading into the World Series, and manager A.J. Hinch is the lone voice of reason within the organization.

Assistant general manager Brandon Taubman has been accused of taunting female reporters over the team’s decision to sign Roberto Osuna, who was suspended 75 games by MLB for violating its domestic violence policy.

Stephanie Apstein of Sports Illustrated broke this troubling story. She wrote that Taubman, while celebrating Houston’s win over the New York Yankees to reach the World Series, “turned to a group of three female reporters, including one wearing a purple domestic-violence awareness bracelet, and yelled, half a dozen times, ‘Thank God we got Osuna! I’m so f—— glad we got Osuna!’”

The Astros responded initially to that report by issuing a statement that called it “misleading and completely irresponsible.”

In response to that statement, many other reporters in the MLB community who were present corroborated Apstein’s reporting.

Since then, the Astros released a second statement. Taubman wrote:

“This past Saturday, during our clubhouse celebration, I used inappropriate language for which I am deeply sorry and embarrassed. In retrospect, I realize that my comments were unprofessional and inappropriate. My overexuberance in support of a player has been misrepresented as a demonstration of a regressive attitude about an important social issue. Those that know me know that I am a progressive member of the community, and a loving and committed husband and father. I hope that those who do know me understand that the Sports Illustrated article does not reflect who I am or my values. I am sorry if anyone was offended by my actions.”

One person who most definitely was offended, based on his own words, was Hinch. The manager told reporters that he was “very disappointed for a lot of reasons” and called Taubman’s actions “uncalled for.”

Taubman’s initial action was reprehensible. His reactions to the story being brought out into the light were as well.

Thankfully at least one man is man enough to say so.