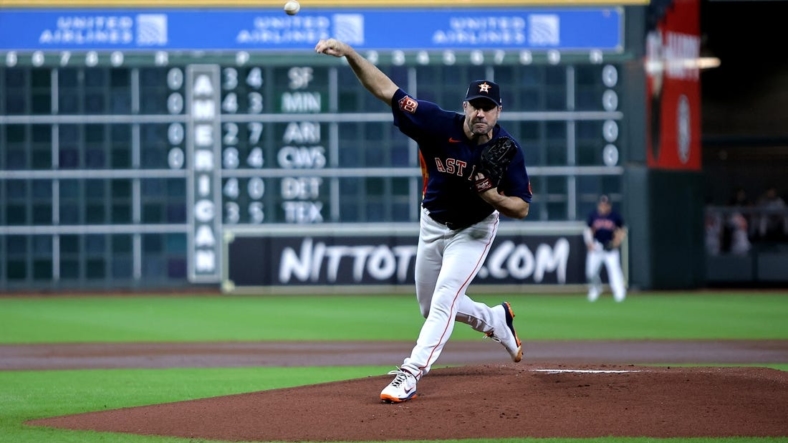 Yuli Gurriel delivered a two-run single in the seventh inning and the Houston Astros averted a three-game sweep at the hands of the visiting Baltimore Orioles with a 3-1 victory on Sunday.

The Astros won despite losing right-hander Justin Verlander after three innings because of right calf discomfort.

Right-hander Austin Voth gave up one run over six innings for the Orioles, who entered with five victories in their previous six games.

Gurriel doubled the Astros’ scoring output for the series by lashing a first-pitch cutter from Orioles reliever Bryan Baker into right field to snap a scoreless tie. Gurriel was the third batter for Baker, who relieved Voth (4-2).

Voth’s outing followed the lead of Baltimore’s Kyle Bradish and Dean Kremer after they combined to limit the Astros to one run over 15 2/3 innings. Voth faced just two batters over the minimum through six innings, getting a pair of double plays.

Voth allowed a leadoff double to Astros shortstop David Hensley in the third, for the rookie’s first-career hit in his second game. Voth stranded two in the third when he retired Jose Altuve on a lineout and Jeremy Pena on a groundout.

Verlander’s day ended after 60 pitches. He labored through a 28-pitch first inning but stranded Cedric Mullins and Adley Rutschman in scoring position by striking out Anthony Santander, Ryan Mountcastle and Austin Hays.

Verlander retired the side in order in the second and worked around a pair of baserunners in the third before leaving after he allowed three hits with six strikeouts.

The Astros bullpen responded as Seth Martinez worked a perfect fourth before Bryan Abreu covered two innings, allowing a hit and a walk with one strikeout.

Houston relievers Ryne Stanek (2-1) and Hector Neris combined for three strikeouts over two perfect innings before Rafael Montero earned his ninth save despite allowing a run on three hits in the ninth.