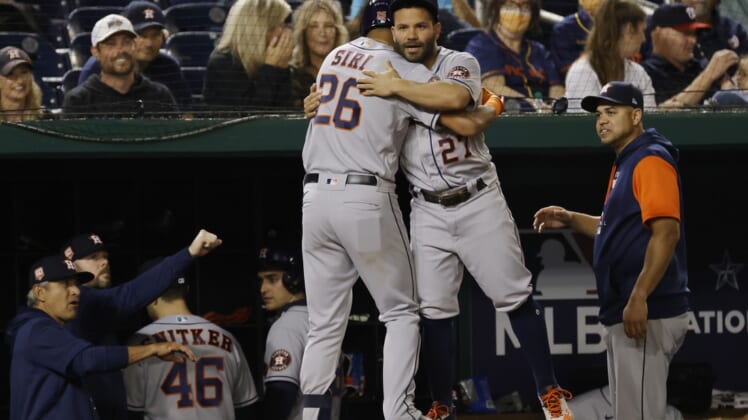 There should be no reason to fret for the Houston Astros after their pitching, which had been so dominant the past couple of weeks, let them down.

They’ll be right back at it Sunday afternoon to finish a three-game road series against the Washington Nationals about 15 hours after their 11-game winning streak came to a halt.

“We weren’t going to win every game (though) I would love to,” Astros manager Dusty Baker said. “We just have to brush that one off and start a new streak.”

The 13-6 loss Saturday night was out of character for Houston; the Astros gave up a total of 12 runs during their winning streak. The loss left them one game away from equaling the franchise-best winning streak.

The Nationals figure they had something to do with that after scoring just one run in the series opener.

“All of us did a great job of making adjustments and going out there and being aggressive,” said outfielder Yadiel Hernandez, who drove in four runs.

Houston had scored fewer than six runs in seven of its first 11 wins this month, so the offense generally maintained its pace.

Washington has posted double-figure run totals in five of its 12 victories this season.

It’s safe to say that the Nationals have generally underachieved with the bats so far this season.

“They’ve got a good lineup,” Baker said. “The guys aren’t hitting until this point, but they were hitting (Saturday). They’re a dangerous crew over there.”

The Astros send out right-hander Justin Verlander (4-1, 1.55 ERA) to try to put the team back on track. Verlander has faced the Nationals just twice in his 460-game career, winning both of those starts (in 2010 and 2013 when he was with the Detroit Tigers).

Left-hander Patrick Corbin (0-5, 6.06 ERA) is slated to make the start for Washington.

Corbin has worked five or more innings in each of his past three starts. The Nationals are 0-7 when he starts this season.

Corbin is 2-1 all-time vs. Houston, though he hasn’t faced the Astros in the regular season since 2017. However, he threw three scoreless innings of relief in the Game 7 victory of the 2019 World Series vs. Houston.

The Astros added utility player Mauricio Dubon in a trade from the San Francisco Giants in exchange for catcher Michael Papierski, a minor leaguer. Dubon is expected to be with the Astros for Sunday’s game.

“I’ve got to lay eyes on him,” Baker said. “He’s a talent. He has some skills. He has some speed. He can play different positions. He gives us some depth.”

That appears to be convenient with second baseman Jose Altuve and shortstop Jeremy Pena battling injuries that might best heal with some time off. They weren’t in Saturday’s lineup, but they should be available for the series finale.

“He was off (Saturday) anyway,” Baker said of Altuve.

Sunday’s game will mark Houston’s final outing against a National League team until June 10 against the Miami Marlins. Washington won’t take on another American League opponent until June 21 at Baltimore.