Astros look to bounce back against Guardians 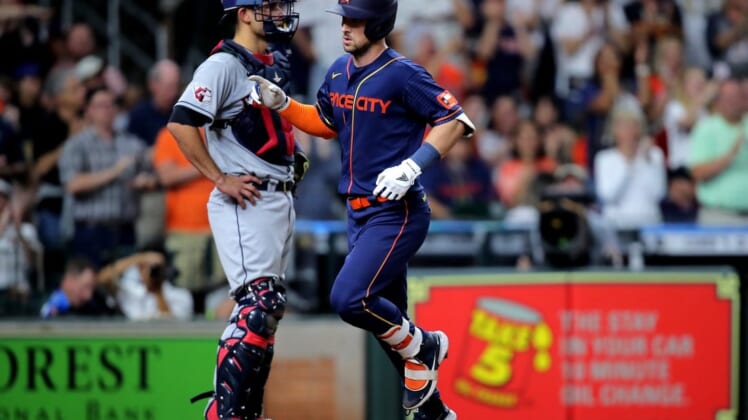 With the end of a challenging stretch of 33 scheduled games in 34 days in sight, Houston Astros manager Dusty Baker lamented the temptation for his club to throttle down on the intensity.

In their 6-1 loss to the visiting Cleveland Guardians on Monday to open a three-game series, the Astros committed a pair of costly throwing errors and appeared lifeless offensively. Regardless of the reason, the Astros recognized they need to finish this stretch strong with just two games remaining between them and the long-awaited day off on Thursday.

“I think we just got beat,” Astros third baseman Alex Bregman said. “You tip your hat to them and come back (Tuesday) and get ready to go. The guys in here do a great job of turning the page and getting back after it the next day.”

Game 2 of the series will be Tuesday night.

Left-hander Framber Valdez (3-2, 2.68 ERA) has the starting assignment for the Astros. He has won back-to-back outings and produced five consecutive quality starts, going 2-1 with a 1.91 ERA and .579 opponent OPS in that stretch. He has a 27-to-9 strikeout-to-walk ratio in those five starts.

Valdez is 2-0 with a 2.00 ERA over two career appearances (one start) against the Guardians. He allowed two runs on four hits and five walks with six strikeouts over seven innings in his previous appearance against Cleveland, a 7-2 road victory on July 1, 2021.

However, after allowing 14 earned runs in his prior three starts, Plesac recorded a quality start, his second of the season, against the Cincinnati Reds last Tuesday. He allowed two runs on six hits and two walks, with three strikeouts over six innings while not factoring into the decision of a 5-4 loss.

Plesac has faced the Astros once, allowing four runs on six hits and three walks with three strikeouts over five innings in a 10-4 home win during his rookie season on July 31, 2019.

Plesac is one of four members of the Guardians’ rotation currently in his age-27 season. The fifth starter, right-hander Triston McKenzie, will turn 25 in August, which makes him the baby of a relatively youthful rotation. Of late, McKenzie has proved his value and flashed his potential.

McKenzie produced his fourth consecutive quality start in the Guardians’ victory on Monday, limiting the Astros to one run on three hits and one walk with three strikeouts over seven innings to lower his ERA to 2.70. He is 3-1 with a 2.05 ERA over his past four starts.

If McKenzie hasn’t yet arrived as a bonafide quality starter, he appears on the cusp of doing so.

“I feel that way; I think he probably does, too,” Guardians manager Terry Francona said. “I think he should. He just hasn’t taken it every five days for years, and it’s not his fault. But he certainly is holding his own and probably more than that.”