Astros land in Houston with 3-2 Series cushion: ‘We got two games’ 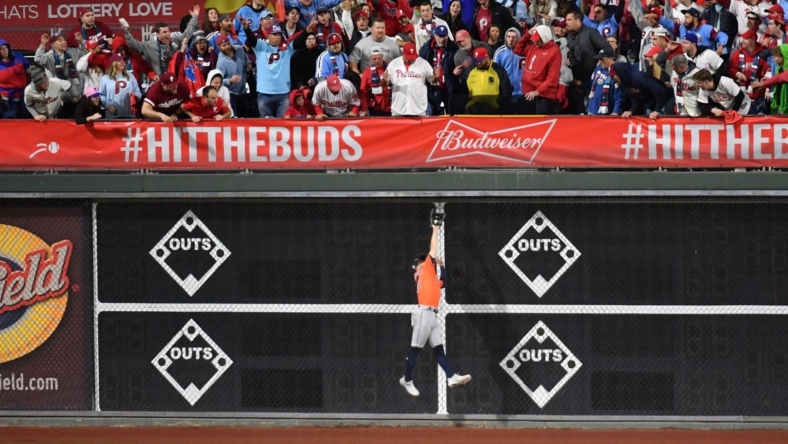 Astros manager Dusty Baker slept well for the first time in recent memory, calmed by the perspective of knowing Houston has two tries to win one game, triggering a World Series celebration in their home park.

“Hey, man, we got two games, potentially two games left and maybe even one,” Baker said Friday on the eve of World Series Game 6 at Minute Maid Park.

The Philadelphia Phillies have to replicate what the Astros pulled off on the road, taking successive games in rowdy, enemy territory, to win the World Series. Philadelphia belted five home runs in a Game 3 trouncing but the Astros turned the tables with a combined no-hitter in Game 4 and a thrilling win in Game 5 highlighted by centerfielder Chas McCormick’s catch to rob catcher J.T. Realmuto of a sure extra-base hit.

“They told me the whole town erupted last night,” Baker said. “They probably erupted when McCormick made that catch because we erupted in the dugout. They’re for us. The town’s for us. Tickets are at a premium because all of a sudden now everybody wants tickets. We could probably hold a couple hundred thousand if we had room.”

The Phillies are turning to Zack Wheeler in Game 6. Wheeler said Friday he doesn’t think the Astros have any momentum, opining he feels a reset when one game ends.

“I take a lot of pride in that and just try to be a stopper and give our team one more chance after tomorrow,” Wheeler said. “So tomorrow’s a must-win and I’ll take pride in that. Hopefully I can go out there and give us the best chance.”

Phillies manager Rob Thomson is focused on winning Game 6 before he can be concerned about a seventh game.

Thomson said the plan as of Friday would be to start Aaron Nola in Game 7 in a “full bullpen game” if Ranger Suarez is needed Saturday.

“I think for Game 7 we probably got both Ranger and Nola lined up. Probably not full pitch count. So if we needed Ranger in Game 6, I think I’d use him,” Thomson said.